The Tyranny of Objects

I am sitting in my sunroom, surrounded by three overwintering geraniums, two spider plants, a Christmas cactus in need of repotting, a large pink ti plant, and a giant peace lily. I am watching the titmouse drinking from the heated birdbath, and the downy woodpecker pecking at the suet. The cat is sleeping on my lap and the dog is napping against my right leg. The sun shining on the snow makes everything as bright as a summer day on a Mediterranean beach.

And I am, until the thought hits me out of the blue that I want another plant. Specifically, I want a ficus lyrata, a fiddleleaf ficus, so named because its big leaves look like somebody’s idea of a violin. A ficus would look perfect on the last square foot of available space (my sunroom is small). With my brain now in seeking mode, I brush the cat off my lap and replace him with my laptop. I type a few words, and whole forests of tropical plants invade my computer screen. 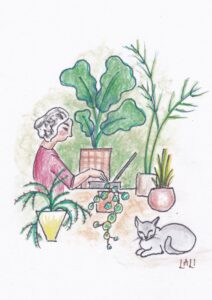 Whole forests of fiddleleaf ficuses, even. I can choose among baby ones, medium-sized ones, or ones suitable for the soaring atria of international conglomerates. They come in plain black nursery pots, or in fancy cache pots. There are cheap ones and quite expensive ones. My finger hovering over the keyboard, I agonize over the various choices, but not for long. Less than five minutes since the idea of a new plant first surfaced in my consciousness, a ficus lyrata–medium-sized, modestly priced, in a plain nursery pot–begins its journey towards me.

When did this sort of miracle become possible? A mere fifteen years ago, if I had wanted a ficus I would have had to get in my car and drive to a nursery. If the nursery had been out of ficuses, or they had been too expensive or sickly-looking, I would have had to look somewhere else, such as Lowe’s or Walmart. I would have had to contend with traffic, and parking, and on the way I might have decided that I already had all the indoor plants I needed.

But now all the wonders of the world, from ficuses to baby tigers (yes, you can buy baby tigers online) to $1,500/lb serrano hams from the acorn-fed black pigs of Spain are–how to avoid this cliché?–at my fingertips. Cheap stuff is especially abundant. I could fill my house chock-full of tables, chairs, lamps, kitchen implements, and clothes, clothes, clothes without going bankrupt.

The problem is, all these things come at a price. I’m not talking about money, or even about the obvious environmental cost here, but about the price they exact from us in time, attention, and energy. Because, as Ruth Ozeki recently said in an interview, objects offer infinite promise–of pleasure, entertainment, savings in time and energy–but they exact responsibility.

The work of caring for an infant tiger aside, even the cheap t-shirts, leggings, tennis shoes, sunscreen bottles and vitamin waters that are so easily available carry the weight of responsibility. First, you have to properly dispose of the packaging. Then you have to find a place to store the object, and every time you use it you have to put it back in the right place, or have your house turn into the kind of mess that calls for an intervention by Marie Kondo. (You can find many seductive, mostly plastic storage devices online, but nobody sells the discipline required to use them.) And, like us, objects have finite lives, and then you have to make a decision about disposing of their remains: what to do with the faded t-shirt, when to throw away the tennis shoes…or can they be donated?

You can see where this is going. I believe that a major cause of nerves and depression today is the tide of physical objects that threatens to engulf us. The very objects that made us happy for an afternoon, a week, or a month have become menacing presences, obstacles to visual harmony and peace of mind.

As for my ficus, it made its final journey from New Hampshire to Vermont on a day when the temperature never rose above zero. When I opened the cardboard box, those beautiful leaves hung limp as wet rags, and the root ball was frozen solid. The plant gave off a smell of cooked spinach, as if it had been stewed by the cold. Still, here it was. As its owner, I had a responsibility towards it. So I put it under a light and sort of propped the leaves to a more natural angle as best I could.

For two days I checked on it as on a dying pet, and on the third I threw it out.