Over the last half-century I have received dozens of Valentine’s Day roses from my best-beloved. Year after year they would appear at the breakfast table, and I would smile and exclaim about the beauty and thoughtfulness of the gift. I would bend my face towards the perfect blooms and pretend to inhale their nonexistent scent, and lightly caress the fronds of baby’s breath so dear to the hearts of florists. I would dig out a vase from the  sideboard, fill it with water, put the roses in, and find a spot where the cat Telemann couldn’t get to them.

And then the death-watch would begin. Because that’s what a bouquet of cut flowers really is, isn’t it–a vigil destined to end with a trip to the compost pile. Until then, it was my job to make the blooms as comfortable as possible, changing their water, snipping off dead leaves, and keeping an eye out for the first fallen petal. In short, I was running a hospice for roses.

Several times a day I would monitor the progress of their doom, from the subtle crinkling of the petal edges, to the final droop of the flower-head on its stalk. Not that I let many blooms reach that point of degradation. I believe in plant euthanasia, mostly for selfish reasons, as I find the sight of their death throes distressing. In my flower hospice, patients were allowed to die with dignity, while they still bore some resemblance to the beauties they had been.

To my dislike of the hospice role was added the anxiety about the ecological impact of Valentine’s Day roses. For three weeks before the holiday, special cargo planes ship billions of blooms from the snow-capped Andes of Ecuador and Colombia to Miami, where they are loaded into refrigerated trucks to keep them fresh until they reach their destination. Those planes and trucks burn some 114 million liters of fuel, and spew about 360,000 metric tons of CO2 into the the winter air.*

But what could I do? I was a woman, a woman who had been given flowers by a well-intentioned man. How could I complain without seeming ungracious? How could I suggest alternatives without being crass? I know with total certainty that if I had consulted them, my mother and my two grandmothers and my four aunts would have said with one voice, “Count yourself lucky, you ungrateful girl, that you have a husband who cares enough to buy you flowers. Water those roses daily, and when the time comes, dispose of them discretely. Woe unto her who lets a man feel that his gestures of love are not appreciated…” and so on.

Nevertheless, last year I decided that our marriage could probably survive my request for no more Valentine’s Day bouquets. But somehow I forgot to mention it in time, and when I arrived at the breakfast table on February 14th, there they were, clad in cellophane and girded with a silk ribbon, the twelve crimson apostles of love.

This year, though, I was prepared. Well ahead of V Day I made my little speech about flower hospice, and was happy to see that my spouse didn’t seem wounded by it. Cleverly, I supplied an alternative.

“Instead, why don’t we go to Lowe’s and get one of those fiddleleaf ficuses that would look so great in the sunroom.”

“Huh, I thought you already had all the plants you needed,” he said, but agreed to come along.

So we set out, in a snow storm, on Valentine’s Day morning, after a rose-free breakfast. The plant section of Lowe’s was empty of shoppers but chock-full of plants of all sizes, including fiddleleaf ficuses. But the ficuses didn’t look as lively as I had hoped, and instead my eye was caught by a stalwart yucca bursting with life-force and whose stiff, dagger-like leaves promised to give the cat Telemann as good as they got.

“You can’t take this poor plant out into that blizzard,” the checkout lady said. “Here, let me give you a plastic bag to cover it with. Have a happy Valentine’s Day!” 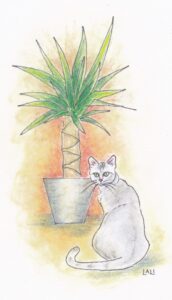 *This is not to disparage blooms from local florists, which take less of a toll on the environment.