I am a battle-scarred survivor of the squirrel suet wars. My wounds are invisible, since no squirrel has ever laid a finger on me, but the years of failed attempts to keep the squirrels from eating the suet intended for the birds have left deep marks on my psyche.

Keeping the squirrels away from birdseed ceased to be a problem when I found the counterweight feeders that close when anything heavier than a bird perches on them. But where suet was concerned, those little boxes made of wire mesh proved next to useless. Despite strategic placement and enormous baffles, the squirrels would latch on and scoop out the suet with their hands even as they gnawed on it with their teeth. I used to buy suet by the case, and keep it in the freezer.

The squirrels grew fat on my suet, some reaching almost groundhog size. For a while I hoped that their obesity would make them dull and sluggish, but fat doesn’t affect squirrels the way it does people, and no matter how plump they grew, their drive and agility remained unimpaired. 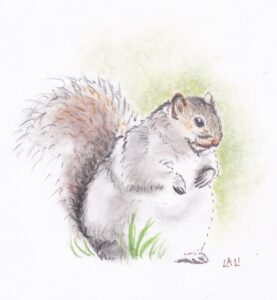 And then some genius invented a counterweight suet feeder. When a squirrel lands on it, two panels drop down to shield the two suet cakes inside, and when the squirrel jumps off the panels spring up, giving birds access to the suet.

I watched a couple of squirrels try to defeat the feeder the first day, and my only concern was that they would chew it to bits in a frustrated rage. They simply could not believe that here were two perfectly good suet cakes, less than an inch from their noses, and they couldn’t get so much as a single crumb. They persevered for so long that I got bored and left the window. By the next morning, titmice, chickadees, and woodpeckers downy, hairy, and red-bellied had found the new feeder, and there wasn’t a squirrel in sight.

But my victory was not unalloyed, because now I felt bad for the squirrels. I told myself that there was enough spilled sunflower seed below the feeders, not to mention the megatons of acorns they had buried in the fall, to keep them going through the winter. Plus, losing some weight might make them healthier in the long run. But still, the squirrels were disappointed, and if there is one thing I hate it is to disappoint an animal.

What bothered me most, however, was that I was taking it upon myself to decide that birds were inherently deserving of food supplementation, and squirrels were not. Who, as Pope Francis said, am I to judge? Why should I give birds preferential treatment–because they’re cuter and smaller than squirrels? A frivolous reason if there ever was one.

Of course, unlike squirrels, many backyard birds are classified as threatened or endangered, and that is a good reason to give them a helping hand. But hunger pangs are hunger pangs, and a non-endangered gray squirrel feels them as acutely as a threatened purple finch.

And didn’t Meister Eckhart say that “every creature is a word of God”?

Yet here I am, discriminating between birds and squirrels. Between fish (which I sometimes eat) and animals with fur or feathers (which I don’t). Between spiders (which I kill–at least the big ones that enter the house), and my dog and cat, whom some might accuse me of overindulging. I often feel like one of those nasty mythological deities, as irrational and capricious as they are powerful, wreaking havoc on the creatures around me.

What to do? How to be a good human on this imperiled planet? Dilemmas abound while answers are scarce. Every choice I make affects someone or something. Sometimes the only comfort I can find is the thought that eventually I will stop consuming, and will instead be consumed. When that time comes, may my dispersed substance bring comfort to whatever being, animate or inanimate, finds a use for it.