During my childhood in Barcelona, every night at 10 p.m., Spanish dinner time, we would eat an omelet. We had had the main meal at lunch: soup, followed by fish, pork, or chicken, lots of bread, and not nearly as many vegetables as today’s proponents of the Mediterranean diet like to imagine. But for dinner we always ate an omelet.

My father liked his eggs on the raw side–in fact the only food he was capable of fixing for himself, and this only in emergencies when there wasn’t a woman around, was a raw egg and a spoonful of sugar whipped into a glass of red wine. Although my mother cooked the main meal, the maid was usually in charge of the evening omelets. And because of my father’s preference, the maid made all her omelets runny, figuring that what was good enough for the man of the house should be good enough for the rest of us.

And it was, except for me. Perhaps in a former incarnation I had been a member of a tribe that hadn’t learned to use fire for cooking, or maybe I was once a mother hen for whom a broken egg signified a tragic loss. For whatever reason, I had a horror of a runny omelets, and the sight of the oozy colloidal “white bits” (coses blanques) used to make me retch and howl with disgust.

But on Sunday nights, when the maid was out with her novio, my mother made the omelets. Unlike the maid, she was a bespoke omelet maker, serving my father’s runny, and mine still moist but free of even the merest suspicion of the dreaded white bits. It was from my mother’s frying pan that I learned what a delight an egg can be.

For years, on the nights when the maid cooked, I continued to gag at her runny offerings, and to this day I cannot bear the sight of uncooked egg whites. This means that I am nervous around fried eggs, tolerating them only if the white is fully firm and the yolk is rubbery and almost solid, which I know is anathema to fried-egg lovers. And I never order an omelet in a restaurant, because it will either be too raw, or it will have had the life cooked out of it.

No, the only omelets I can eat are the ones that my mother used to make, or the ones I make myself–or, surprisingly, the ones that my daughters make. I say “surprisingly” because I don’t remember teaching them the art of the omelet, just as my mother didn’t teach it to me. I must have learned by observation–all those omelet dinners were bound to leave some residue in my brain. But when my daughters were small we didn’t eat omelets all that frequently, so I can’t imagine how they learned.

I like to think of our omelet-making talent as evidence of a mysterious thread that connects four women from three different generations–like a penchant for irony, or the ability to pick up a pencil with our toes– and that has resulted in the capacity to do perfect honor to the fruit of that often disregarded female, the hen.

Here, in case you are interested, is how to make the matrilineal omelet:

Turn on the burner and pour a little olive oil into a small, preferably heavy, frying pan. Break one egg into a bowl, salt and pepper it, and beat it with a fork twenty-four times. Drop the egg into the hot oil, remove the pan from the heat, and tilt it from side to side until its bottom is covered with a thin yellow film. When the egg is barely set, fold the omelet in half, flip it onto a plate, and serve it immediately to a loved one, using the same fork. 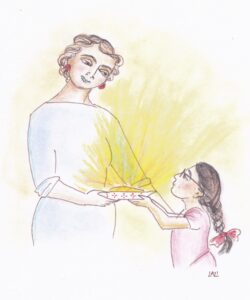