It’s almost midnight, and I am at that point in the falling-asleep process when rational thought takes off in quirky directions: I am helping a team of surgeons to perform a liver transplant, or listening to my vet as he advises me to go on the same diet of raw turkey as my gray cat, Telemann.

Telemann, in fact, is outside my door, alternately pleading and peremptory, meowing to be let in. The meows are followed by a scratching sound. I open one eye and see in the darkness his little white paw reaching under the door. This triggers a compliance reflex in me, so I get up and invite him in. You would think that he’d rush right in, full of gratitude, and jump into the still-warm bed. But no. Instead, he positions himself near the hall bench and begins his strange minuet.

Holding his tail–and it is a long tail–as vertical as he can, he backs up until it touches the edge of the bench. “Not tonight, Telemann, please” I beg. “It’s cold. Come to bed now.” But to no avail. His eyes fixed on mine, he starts to vibrate his tail in a curious rapid, sideways motion. When the tail reaches full speed, he lifts his white-stockinged hind legs, first the right and then the left, slowly and carefully, as if he were flinging sand or dirt behind him.

“Heeeere, kitty,” I whisper, patting my thigh, even though this has never worked in the past and will not work now. I am tempted to go back to the bedroom and shut the door, but I know that as soon as I close my eyes the meowing and the thing with the little white paw will start again.

There is nothing for it but to wait out the dance, which he performs with a grace and solemnity, as well as the white stockings, worthy of Louis XIV. When he has done the prescribed number of repeats, plus the da capo al fine, he  ambles majestically into the bedroom, his purring the only indication that he is in fact terribly pleased to be allowed in and not simply doing me a favor. Once we’re both in bed, he curls up in the crook of my arm, gives my hand a scratchy lick or two, and goes to sleep until morning.

As you know if you have watched as many nature documentaries as I have, Telemann’s minuet is in fact a marking behavior. Tigers and lions in the wild will back up against a tree, point their tails to the sky, vibrate them from side to side and, lifting one hind leg and then the other, spray urine onto the trunk. This is how they tell their neighbors who they are and what they’re thinking about, which usually boils down to territory and sex.

I am deeply grateful that Telemann’s tigerish behavior stops short of the spraying part. Otherwise the choreography is identical. But what does it mean to Telemann? He was neutered in infancy, and has never known an adult female of his species besides his mother, so I doubt that his dance has anything to do with sex. And it doesn’t make sense that he would be claiming the hall bench as his territory, since he would then have to defend it against beings much larger than he.

The middle of the night is not the only time that Telemann does his routine. He often performs abbreviated versions of it when he first sees me after a separation, or in the kitchen while I am preparing his raw turkey dinner. But the midnight minuet is the only one in which he is purposely delaying something that he really wants to do, namely, to jump into my cozy bed. It’s as if this four-year-old, eleven-pound being, who has lived his entire life inside my house, has somehow figured out the value of anticipation, and knows that the pleasures of the warm bed and my arm around his body will be all the sweeter for this pause. A pause that, being an artist, like all cats, he fills and adorns with the stately motions of an ancient dance. 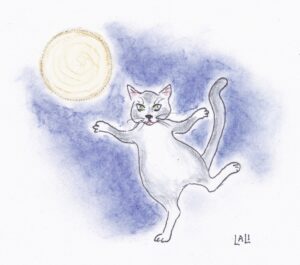