You know how, when you’re crossing items off your to-do list, just as you’re about to finish the last one you get an email, or a phone call, or a text, or all three, and suddenly your list is half a page long again? Tasks keep leap-frogging over each other, so that the longed-for moment, when everything is done and you can finally be at rest, never comes.

I once had a secretary (remember secretaries?), one of those super-capable women who in a less sexist era would have been in charge of a multi-national corporation, who used to obsess about to-do lists. No matter how hard she worked, new tasks were forever popping up. “If I could just once finish everything on my list, I’d be happy,” she would sigh as she shrugged on her coat at the end of the day.  Hating to see her drive herself so hard, I would try to console her. “Shirley,” I would say, “if we ever come to the end of all our lists it will mean we’re dead.” But she didn’t really hear me, and she kept waiting for that halcyon day when she could cross off the last item and be done for good.

Lately I’ve been telling myself that I should heed the advice I used to give to Shirley. Every morning, when I look at my list of obligations for the day, I think, if I can simply get X, Y, and Z done, then I’ll be o.k. I’ll be content, serene, at peace. I’ll probably even be happy.

Here are some of the ducks that torment me (you may have met some of them yourself):

cleaning out the spice rack

waiting on hold while the precious minutes of my life slide away like pearls from a necklace.

Like mobs of mallards and muscovies, these dreary tasks nibble at my essence. They consume my days and haunt my nights. They rob my life of any semblance of harmony and elegance. They sap my creativity.

But it’s no use thinking that it shouldn’t be this way. Endless lists and soul-killing tasks are the very fabric of existence, and to be done with them is, as I used to tell Shirley, to be dead. The ducks that peck at me with their little rounded bills (think how much worse I’d feel if they were chickens, with those sharp beaks) are the ducks of life, and it behooves me to make my peace with them.

Thinking about the mundane tasks that often ruin my days, I see that it’s not so much the tasks themselves that annoy me, as the idea that I shouldn’t have to do them, that my life should be different somehow, dedicated exclusively to lofty and beautiful things. Like Puccini’s Tosca (vissi d’arte, vissi d’amore!) I should be living only for art and love, not for dull routines. I was born to do exquisite, fun, and not terribly difficult things.

But why should I be exempt from the dreary stuff? Why should I be free of nibbling ducks? Centuries ago my foremothers had to fetch their water from a stream, which probably got really old after a while. My forefathers sawed mountains of logs for the hearth. My grandmother killed endless rabbits for the table. My mother mended socks. Who am I to complain about being put on hold by the local pharmacy?

Rather than shooing my ducks away, then, I’ve resolved to accept their incessant nibbling, their quacking and flapping and their messes. Instead, I will try to make things nice for them, to embrace them even, and give them grain, clean water in which to swim, and dry straw for their bedding. Because they aren’t just any ducks, but my own personal flock, sent to me by the universe for its own unfathomable reasons. 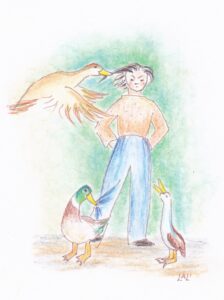