Tales from the Hive, Part 1

This spring, I have apprenticed myself to the beekeepers in the retirement community where I live. Ignoring Thoreau’s advice to beware of all enterprises that require new clothes, the first thing I did was buy the appropriate regalia in which to approach the bees.

This consists of a long-sleeved jacket bristling with zippers and velcro patches, a pair of thick leather gloves with sleeves that reach up almost to my shoulders, and the iconic beekeeper’s hat with attached veil. The bottom of the veil zips to the top of the jacket, which reaches to just above my knees. The jacket’s hem is elasticized, and fits snugly around my legs. Pant legs tucked into socks complete the look.

If you think that wearing a face mask is uncomfortable, you should try dressing up in a bee suit. Encased in my protective gear, I feel like a medieval knight in battle armor, except that in my case the “enemy” is half the size of my thumbnail.

Consisting of a single hive, ours is not a big operation, and for cause: sixty-five percent of Vermont hives did not make it through the winter, the second-worst loss of bees in the country. The culprits may be mites or pesticides or both, but in any case we’re being conservative, and will add more hives later if it seems warranted.

The bees arrived several weeks ago, on a chilly day when the trees were still leafless, a crisp breeze was blowing from Lake Champlain, and the dandelions were still in bud. They came in a cardboard box containing a queen and ten thousand of her subjects. I peered through the veil as my bee mentor lifted the lid. Inside were a number of vertical wooden frames over which the bees were teeming, crawling, creeping, swarming, seething, and boiling over and under and around each other.

“Look, there’s the queen!” one of the apiarists said, his voice full of reverence. I looked, but I could only, to misquote Saint Paul, see through a veil darkly. Not just the bees, but the beekeepers too were in awe of the queen, who, once she settled into her new quarters, would lay one thousand eggs a day for the rest of the season.

As the frames were slowly—everything to do with bees has to be done in slow motion—transferred from the transport box to the hive, everyone exclaimed at the comb that the bees had already started building onto the frames. They marveled at how healthy and active the bees seemed, and how tenderly they swarmed around the (still to me invisible) queen.

“And look!” a master bee woman said, pointing into the bee melee, “This one is doing the waggle dance!” This time I saw what she was talking about. One of the ten thousand bees was vibrating from side to side, sort of like a compass needle, telling her sisters where there was a source of pollen and nectar. And she must have been doing a good job, because a number of bees, not wasting time, were already coming back from their foraging flights into the still wintry landscape, bearing bright little globs of gold-to-orange pollen on their tiny thighs. If there was a flower blooming somewhere in the woods, they had found it.

“Now I think we’d better finish up and get out of here,” the bee woman said. “They’re starting to tell us that we’re annoying them.”

“They’re telling us what? How can you tell what they’re saying?” I asked.

“Just listen to their voices,” she answered. “Hear how their buzzing has gotten higher?”

And she was right. The buzzing had gone from maybe F to F sharp, something I would never have noticed on my own, no more than I would have noticed the pollen sacks, or the waggle dance, or Her (still unseen by me) Majesty.

And on that first day I realized that, though my apprenticeship will involve frames and supers and smokers and hive tools, the most important part will have to do with noticing—getting my head out of the clouds and inside my veil, and paying attention so I can learn the language, the customs, and the culture of the hive. (To be continued.) 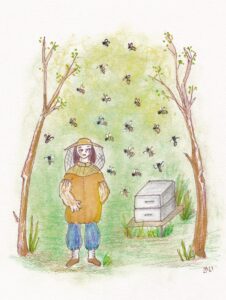