Candide to the Rescue

Another morning, another failure. Again I have neglected to do what I had resolved: to be present through my daily routines. Present while making tea, present while Bisou ate grass and sniffed the ground, present while I brushed her teeth and cleaned the cat litter, present during my twenty eternal minutes on the meditation mat.

Instead, I was deep in my neuronal thickets, thinking. And, as Thich Nhat Hanh used to say, “I think; therefore, I am not here.” So while the tea steeped and Bisou sniffed and my perfect-temperature-and-water-pressure American shower cleansed me of all impurities, I was busy viewing the newsreel that plays non-stop inside my head in this disaster-rich season.

I was watching those deeply wrinkled, toothless Ukrainian grandmothers—probably born the same year as I—scrabbling through the rubble, looking for the bodies of Ukrainian children slaughtered by Russians. I was seeing the small coffins of American children slaughtered by Americans. (King Herod would be in his element these days.) I was thinking about politicians, and baby formula, and that vanguard of the apocalypse: late-summer flowers blooming in May. (Also, what’s happened to  the hermit thrushes? They should have arrived in Vermont in April.)

And I was replaying the endless pleas for help, money, and action that hammered at my conscience to do something, right now, before things get any worse. But where to even start?

By the time I had finished with the walking and the tooth brushing and the showering I was in a state of paralysis. Given the enormity of the challenges, sending money to the charities listed as trustworthy by the New York Times, voting for politicians who favor gun control, and keeping the house a couple of degrees warmer in summer and a couple of degrees colder in winter seemed ridiculously inadequate. Of course if we all did these things the situation would improve a lot. But it’s clear that we’re not all going to do these things, and I began to feel that familiar tightening of the chest that heralds an anxiety attack.

In Candide, Voltaire’s ferocious critique of Enlightenment optimism, the hero and his friends travel  the world. They witness and endure persecution, shipwrecks, earthquakes, rape, smallpox, starvation, cannibalism, torture, and other horrors. At the end, settled in Turkey after having abandoned the naïve belief that all is for the best in the best of all possible worlds, Candide and his pals meet an old farmer sitting contentedly under an orange tree. Candide asks his opinion about the recent political murders and executions in Constantinople, but the farmer answers that he thinks about the city only as a place to sell the produce of the little farm that he works with the help of his children.

“Let us then work without thinking. It’s the only way to make life bearable,” one of the friends declares.

And Candide concludes, “we must cultivate our garden.”

Was Voltaire correct? Is it o.k. to turn our eyes away from the obsessive contemplation of the world’s troubles and simply…grow a garden? Can this be right? Hadn’t I better march in the streets, get rid of my electric appliances, and give all my money to the poor? But if I do that I will become a drain on others, who will then have to buy my groceries and do my laundry, so that is not an option. On the other hand, if I concentrate on cultivating my garden—and my life—making it as rich and fruitful and welcoming as possible, is that the path to wisdom and, more importantly, the path to a better world? Or does it lead to a selfish, constricted, ungenerous existence?

In the end, here is my choice: to fret and despair, and make everyone around me miserable in the process. Or to focus less on the big stuff, turn off the TV and the newsreel in my head, and concentrate on what is right before me, cultivating my garden as best I can, hoping that the peace I gain will make itself felt to others, and be my contribution to the world. 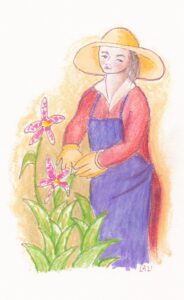