Of Foxes And Hedgehogs

Have you noticed how often the word “hobby” is preceded by “just a”? And the synonyms for “hobbyist”—dabbler, tinkerer, potterer—are all pejorative. Amateur, meaning a lover of something, is better, especially since in sports it implies not lack of skill but lack of interest in remuneration. But I prefer dilettante, from the Latin delectare—one who delights in something.

Dilettantes, by whatever name, universally get a bad rap. The world reserves its admiration for those who single-mindedly walk a single path. True, both Einstein and the painter Ingres liked to relax by playing the violin (in French, le violon d’Ingres has come to mean a hobby or avocation, although how anybody can relax while playing the violin is beyond me), but the musical dabblings of those two geniuses are usually viewed as a humorous quirk, rescued from triviality by the value of their “real” work.

The rest of us run-of-the-mill dabblers, tinkerers, and amateurs can expect an indulgent smile at best, and often a not so veiled smirk of contempt. I know, for as the daughter of a single-minded musician I developed early-on a disdain for people who were “not serious” about their art or their science or whatever. You can imagine my humiliation when the years revealed me as that epitome of frivolity, a dyed in the wool dilettante.

It’s not been easy for me to come out of the closet where I lurked while flirting with biology, literature, music, vegetable gardening, languages, animal husbandry, drawing, cheesemaking, stone carving, wood whittling, and writing. But when I emerged into the light, I found as one usually does that I was not alone, either in my fondness for doing many things, or in my feelings of shame.

The dabbler’s dilemma has haunted humanity for a long time. In ancient Greece someone named Archilochus said, “A fox knows many things, but a hedgehog knows one big thing.” As the hybrid offspring of a hedgehog (my father) and a fox (my mother, whose genes turned out to be dominant), I must question Archilochus’s assumption that what the hedgehog knows is necessarily big or important. The single thing that fills up the hedgehog’s tiny brain might be big and extraordinary, or it might be small and boring.  A real hedgehog is nothing like Beatrix Potter’s Mrs. Tiggy-Winkle, she of the spotless white apron and frilled cap. Real hedgehogs sleep all day, creep about under hedges at night, and when confronted with a new stimulus roll up into a ball, there to contemplate the one big thing in their mind.

On the other hand, have you ever met a boring fox? Trotting lightly from rabbit den to chicken coop, stopping now and then to lick and smooth her tawny coat, she smiles at the many thoughts inside her head, and, unlike me, wouldn’t even dream of envying the hedgehog.

Still, how can we hope to help this sad old world if we don’t concentrate on doing one thing, and doing it well? Unfortunately, there is no guarantee that if we focus on a single thing we are bound to do it well. And who says that dilettantes don’t make the world a better place? What can be more life-affirming than to take delight in many things? Taking delight presupposes paying attention, and if everyone paid attention and took delight in planting wildflowers, drawing from life, playing the harpsichord, or rescuing salamanders, the planet would be a more peaceful place. (I am not considering, of course, abominable hobbies such as shooting animals for pleasure and painting on velvet.)

The dilettante embodies what Buddhists call shoshin, beginner’s mind—an attitude of openness and eagerness, a lack of preconceptions. Who can ignore the charm of starting out on a brand-new path, whether crochet or calligraphy, knowing nothing, hoping to learn everything, recapturing for a while the wide-eyed anticipation that we all possessed as children?

If introverts and HSPs (Highly Sensitive Persons) can take pride in their identity, it is high time for us amateurs and dilettantes to unite and fly our banners high. I propose the fox as our mascot, and Leonardo da Vinci as our patron saint. 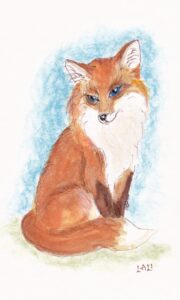 PrevPreviousTo Flow Or Not To Flow
NextTales from the Hive, Part 1Next