“Think!” my father would say when I complained of boredom. “An intelligent person is never bored.” Not wanting to disappoint him, I early retreated to the inside of my cranium, where I can usually still be found. It wasn’t until much later that I began to realize that this was not the best place in which to spend the rest of my life. Thich Nhat Hanh’s take on Descartes, “I think, therefore I am not here,” made an impression on me, and I would try periodically to get out of my head and attend to the outside world.

But I had a lifetime’s habit to overcome, having spent my childhood with my head in the clouds, or, as they say in Spanish, en la luna:  I’m twelve years old, in school in Quito. My class is filing across the courtyard when we are stopped by Madre Mercedes, she of the scary green eyes, who admonishes us about something or other. Then the file moves on and disappears into the cloister, leaving me behind. I come to with a start, and as I run to catch up, I hear la Mercedes mutter, “Benejam, siempre en la luna.”

The brain, however, is capable of change to the very last, so for 2022 I am resolving to get out of my head, open my eyes, and embrace the world in all its aspects. There are many good reasons to pay attention. It’s supposed to make one calmer and happier, able to live in the present rather than in those problematic tenses–the anxious future, the melancholy past, or the wistful conditional.

Paying attention is also a moral act, “the rarest and purest form of generosity,” according to Simone Weil. I am fairly good at attending to animals and plants because they don’t speak, so I have to observe them carefully to understand their meanings (yes, my plants have “meanings”–don’t yours?). But people are a different story. You may not have realized, during our last conversation, that while I pretended to listen I was in fact ensconced in my inner attic, preparing drafts of what I would say the minute you paused for breath.

Good writers are great attenders. There is no end to the stuff they notice. There is Anne Tyler describing the sudden silence as you drive through an underpass during a rainstorm. Here is Nabokov, in Speak, Memory!, on a raindrop falling off a leaf: Without any wind blowing, the sheer weight of a raindrop, shining in parasitic luxury on a cordate leaf, caused its tip to dip, and what looked like a globule of quicksilver performed a sudden glissando down the centre vein, and then, having shed its bright load, the relieved leaf unbent. Tip, leaf, dip, relief….  And, of course, there is Mary Oliver and her grasshopper.  So if I want to write better–and what else is there to aim for, in this going-to-pot planet?–I need to get busy and attend.

But I have lived through too many new years, and failed at too many resolutions, to expect that I will follow through on this one. It’s more likely that I will do o.k. for a day or two, looking around and noticing stuff, and then I will retreat into my inner garret and slam the trap door shut. And when several days later I notice how badly I have performed, I will declare the whole notion of resolutions absurd, and give up.

The only way for this to work is to append a second resolution to the first: to embrace my foibles and imperfections, and to pre-absolve myself of all inevitable future failures. It will not come easy for one reared on the lap of Holy Mother Church to embrace imperfection in any form, no matter how trivial. But if not now, when? God forbid I should find myself on my deathbed regretting a life spent with my head in the clouds, or even worse, en la luna. So here is my mantra for 2022: to attend, and forgive.

I will let you know how it goes. 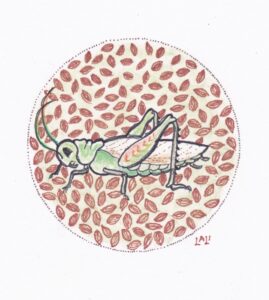