This is a summer story, but because it always took place in the dark of night, I am remembering it at this dark time of year.

As soon as school let out in June, my mother would pack our suitcases and we would leave Barcelona for my grandparents’ farm. We went by train. But first there was the fuss about the suitcases, and my mother’s urgent instructions to the maid about my father’s nightly omelet (he would stay behind, working, and join us in a couple of weeks). There was the calling up of the ancient cage elevator, and the loading of the luggage, and the clanging descent to the ground floor, which was only allowed on occasions involving heavy objects. There was the anxious hailing of a taxi, my mother’s fretting that we would miss the train, the line to buy tickets, and the relief that the train was still there after all, waiting for us and breathing out clouds of steam like a great beast impatient to get going.

After we found our seats, my mother relaxed but I felt temporarily let down, because the times of bustle and chaos and adult nervousness were the great entertainment of my early years. My mother and I sat across from each other. She was prone to paralyzing bouts of vertigo, and always had to face in the direction of travel. But I was impervious to dizziness, so I sat with my back to the engine. This made me feel both protective and a little contemptuous of my mother. I was proud to be spared her feminine frailties.

Getting used to the jolting of the train, and to the sight of the outskirts of Barcelona speeding away from me, occupied the first part of the journey. I spent the rest making my mother recite, over and over, the names of the remaining stations until we arrived, travel-weary and covered with soot, at our stop, Bellpuig.

And in Bellpuig my grandfather was waiting for us with his horse and the tartana. This was a two-wheeled carriage, covered with a tarp stretched over hoops of bent wood, like miniature version of the prairie schooner. The interior seemed oddly formal, since the two banquettes that lined the sides were upholstered in faded, red tufted velvet. You entered the carriage from the back through a little half door whose inner surface was lined with the same upholstery as the banquettes. But first you had to step on the little iron step that projected below it. And because the carriage only had two wheels, when you put your foot on the step the entire tartana would tilt dangerously and excitingly towards you.

I sat at the front, as close as I could get to the horse. But because the horse was big, and I was small, and it was dark, all I could see were his rounded, mountainous haunches. My grandfather would twitch the reins and click his tongue, and I would experience a different style of jolting from that of the train, this one gentle and wave-like, punctuated by the liquid sound of hooves on pavement.

And as the horse moved from a walk into a gentle trot, he would sometimes raise his tail, and before my very eyes the hole under the tail would dilate alarmingly until round black balls of manure emerged and dropped to the ground, all this without the horse missing a single step.

For nine months of the year I was a child of streetcars, metros, and taxis. Every time I stepped outside our apartment building my hand was tightly held by a protective adult. Those rides back from the station, accompanied by the occasional nightingale singing in the olive groves, heralded a season of dirt roads, snail hunts, and the freedom to walk outdoors all by myself. Elijah in his fiery chariot was not more thrilled than I in my grandfather’s tartana, being fetched to paradise. 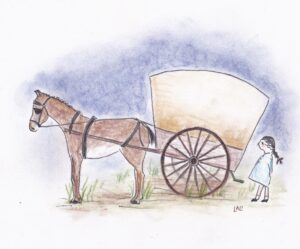