Prayers and Fasting for Ukraine

I used to be a prayer athlete. As a girl, my days were punctuated by prayers. I prayed when I got up, before I went to bed, before meals, and at the beginning and end of each class. In the evenings, I often said the rosary with my parents, and I prayed in church on Sundays and holy days of obligation. I prayed for God to send me a little brother or sister, and for the Magi to bring me the doll I’d had my eye on all year. I asked the Holy Ghost for assistance during exams. and the Virgin Mary for help being a good girl. I prayed to my Guardian Angel to keep me safe. When I learned to drive, I made the Sign of the Cross every time I got behind the wheel. And when I fell in love I prayed to God and all the saints that my love would be returned.

Along with prayers, I was also brought up to make little daily sacrifices–to chew and swallow instead of spitting out a tough piece of meat, or to say my prayers kneeling on the cold floor tiles instead of in my warm bed–for the sake of the souls in Purgatory, or of widows and orphans in faraway places. Exactly how my discomforts were supposed to help those sufferers was never made clear.

When my father fell terminally ill at fifty-three, I remembered that faith could move mountains.  So I closed my eyes  and prayed and believed with all my strength, but no mountains moved. My father died and I was left bereft, not only of him, but of faith.

That loss, combined with the Catholic Church’s stand on various sexual and gender issues, marked my departure from the spiritual home that had sheltered me from birth. I was young, and life was disgorging its wonders before me: marriage, school, babies, a profession. I thought, therefore I was. Who needed all that other stuff?

But now that the sun is starting to set on my horizon, I sometimes regret that departure, especially in these cataclysmic times. So I’ve been thinking about Pope Francis’s proclamation of today, Wednesday, March 2nd as a day of prayer and fasting for Ukraine. Blame it on all those years of Catholic school, but the Pope’s pronouncement makes immediate sense to me. What do you do when faced with a desperate situation? You pray, and if it’s desperate enough, you fast.

But then the “enlightened” part of me says, what are the chances that God, if She exists (which I hope She does), will intervene in the Ukrainian war just because we asked Her to? Surely lots of people prayed during the Holocaust, and the Spanish Civil War, and the whole sorry history of humanity, to no avail.

It’s curious that Francis asked people not only to pray, but to fast. Other than as a tool for weight loss, you don’t hear much about fasting today. The very notion has an archaic flavor, reminiscent of hair shirts and flagellation. What good would it do to fast for Ukraine? It’s not as if I can pack up my lunchtime sandwich and send it to the refugees pouring into Poland. Will our willingness to suffer a little individually but massively en masse stand a better chance of persuading Her to take pity on that brave nation? I can already see Putin smirking at the thought of thousands of Christians going without lunch in hopes that God will make him call back his tanks.

I suspect that Francis’s intention was focused on the inward effects of the fasting on the fasters. Today, Ash Wednesday, our hunger pangs will remind us at regular intervals of the suffering of Ukraine–of the suffering of the whole planet, even–and when that happens we may each, as our stomachs growl, be inclined to be a little kinder to each other. And maybe that tiny action, multiplied a zillion times, will, like the butterfly beating her wings in the Amazon, cause a tsunami of mercy to sweep over the entire planet.

I think I will skip lunch today. 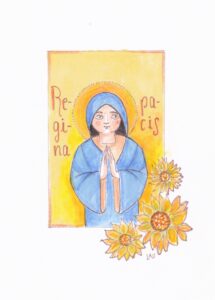