How to Make an Old Dog Happy

My little red dog, Bisou, is twelve. I don’t want to even think how old that is in human years.

I took her to puppy classes, then to obedience, rally, and agility. “She’s fast,” our agility instructor said, but I assumed that all dogs were fast, at least compared to me. Soon, however, it became apparent that speed was what Bisou lived for. I would take her out in the woods, put her on a sit-stay, and walk away until she became a small red speck in the distance. “Bisou co-ome!” I would carol, and she would take off like a bullet, giving little yelps of pain as she leaped over sticks and briars on her way to me.

Agility class was her favorite. She flew over jumps, dashed through tunnels, whisked up and down the A-frame . Most dogs have to be lured with treats and cooing onto the teeter, but this was Bisou’s preferred obstacle, because of the loud bang it made as it hit the ground.

She came by her talents honestly. Her father retired from agility as a MACH10, and her beloved brother, Bear, also had a distinguished career in the field. But there was no space in my life for serious agility training, let alone competition, so Bisou became “just” a pet with an insane need to run. Even with the aid of a ball thrower, my arm would wear out long before she did. When she wasn’t outside luring our German Shepherd Wolfie into chasing her (her tight turning radius made her a challenge to catch), she was jumping on and off sofas, beds, and windowsills, inventing her own indoor agility course.

We all breathed a sigh of relief when, at around eight years old, she slowed down slightly. She wasn’t as eager to chase balls on hot days. Her naps got longer and more frequent, and her sleep deeper. She began to lose her hearing. Now, when I come into the house, instead of being met by a whirling dervish at the door I find her dozing on the sofa.

Worried about the direction in which she was headed, one night, instead of handing her her bedtime piece of kibble, I put her on a sit/stay at one end of the kitchen, walked away and called her. She whooshed over and sat in front of me, her eyes locked on mine with a manic gleam. “Good girl!” I squealed, and gave her the treat. In response, she ran twice around the kitchen, her nails scrabbling on the tiles, her ears flying out behind her.

The next day, I put her on a sit/stay at one end of the cottage and called her from the other end. When she came I signaled a quick series of downs and sits, and delivered the kibble. She was transformed, grinning from ear to ear, her entire body saying “more, please, don’t stop!” And that long-ago wild and crazy fire was in her eyes again.

Over the next couple of weeks I put her through every combination of commands–sit, down, stand, sit, stay, heel, come, wait!–that I could remember. I noticed that she was following me around the house, not in the usual Cavalier fashion of waiting for me to sit down so she could cuddle, but with that questioning, expectant look, saying, “what now? What else can we do right now?”

Remembering how much she had loved the agility jumps, I cobbled one out of two plastic milk crates and a wooden pole.  I made Bisou sit at a distance from it and called her. She’ll go around the crates, I thought, or she’ll misjudge the height and trip. But she cleared it by several inches and slid to a sit before me. If you’ve ever seen ecstasy on a dog’s face, then you know what I saw. I pointed to the jump and she leaped over it again, then leaped to come back to me, yipping with joy.

It turns out that the guidelines for a happy old age–keep moving, exercise your brain, play with your friends–work for dogs as well as humans. And when I see the gleam in Bisou’s carnelian eyes, and her gray muzzle parted in a grin, it strikes me that there are worse ways to counteract the grimness of these times than by bringing a bit of joy into an old dog’s life 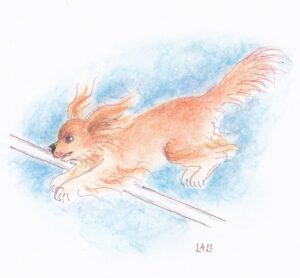