Saint Eulalia, virgin and martyr, was a thirteen-year-old girl who, in 303 CE, ran away from her wealthy parents’ house in the outskirts of Barcelona and presented herself at the palace of the Roman governor Dacian to berate him for his persecution of the local Christians. In response, he had her variously tortured and finally crucified on an x-shaped cross. At her death a white dove flew out of her mouth, and a miraculous snowfall shrouded her desecrated body. She is buried in the crypt of the cathedral of Barcelona, and a flock of thirteen white geese swim in her honor in the basin at the center of the cloister. Her feast day is February 12.

At ten and eleven years old, I felt lucky to have such a spunky saint as my patron. She was a far cry from the other, milder-mannered virgin martyrs of her time, such as Lucy, Agnes, and Agatha, whose principal motive for undergoing torture and death had been preserving their virginity and avoiding marriage to a pagan. My saint, on the other hand, was not concerned with virginity, but with justice.

Plus, and this seemed extraordinary to me, she had clearly disobeyed her parents when she left the house without their permission, determined to do what she thought was right. I could see her so clearly in my mind, tiptoeing out of the house in the middle of that cold night, careful not to wake up her father’s dogs, and then, her black braids flying, running downhill to the harbor where the triremes were anchored, to arrive breathless at the palace as the sun was coming up, banging on the gates, and persuading the sleepy guard to take her in to see the governor. Was she, I wondered, scared at all?

Her escapade brought up an interesting moral question: was it in some cases o.k. to disobey your parents, even if they were good people who hadn’t asked you to do anything wrong? Could you be disobedient and saintly at the same time? And what did she say to Dacian that frightened and enraged him into spending an entire day torturing and killing her instead of simply having one of his soldiers take her back home in time for breakfast? (It wasn’t until much later that I discovered that Eulalia means “well-spoken,” from the Greek eu-good and lalein-to talk) .

I, who had been brought up to regard obedience to my betters as the highest virtue, was charmed and excited by my disobedient saint. I hoped that some of Saint Eulalia’s courage would rub off on me, but I had been sufficiently indoctrinated not to even think of imitating her. Still, we did have geography, gender, and age in common… I knew that mysterious forces had been at work in her–probably the Holy Spirit himself–that I didn’t have a chance of attracting. But it was tantalizing to imagine what it must be like to be so certain and so determined as to run away from home in the middle of the night, not to mention deliver a scolding to the most powerful man in the country.

Of all the female characters in the fables and fairytales that filled my head in those years, Saint Eulalia was the only one who made her own fate.  Hers was the only story I knew about a girl using words as weapons to fight injustice. She could have avoided everything by simply being obedient and staying home. Instead, she insisted on making herself heard. She must, I thought, have been as vocal and fierce as the cathedral geese, whose irreverent honking echoed through the stone cloister, so that you could hear them even as you knelt inside, praying before the main altar.

In a culture and an era that prized meek compliance in females, I was lucky to be assigned to the special care of such a daring and rebellious saint.  I see her as the ancestor of Joan of Arc, Malala Yousafszai ,and Greta Thunberg, who, like Saint Eulalia, did not hesitate to speak truth to power.

I think of her often in February, especially when it snows. 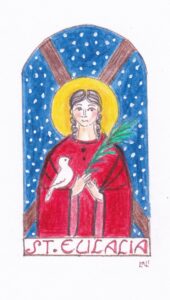