I am somewhat of an international authority on nuns, having been taught by German nuns in Barcelona, by Ecuadorian nuns in Quito, and by American nuns in Birmingham, Alabama. My first two schools were for girls only. The only man in the Barcelona school was an ancient Carmelite priest who came every Wednesday to hear our confessions. He wore a brown habit with a hood and scapular, a rope around his middle, bare feet in sandals even in winter, and a sparse white beard that reached down to his waist. In the school in Quito there were a couple of male teachers—diffident, retiring men—but we girls paid more attention to the hordes of boys who used to follow our school bus on motorcycles as it made its rounds, and who used to drive our bus chaperone, pretty, green-eyed Madre Imelda* to tears of rage and frustration.

When I arrived at the Alabama school in ninth grade, it was a shock to be in class with actual boys, with their long legs and loud, unpredictable voices. And it was even more surprising to have my English teacher, smiley, cheerful Sister Mary Rose, ask us to memorize traditional ballads—Barbara Allen, La Belle Dame Sans Merci, Lord Randall—which had to do with love and death and dangerous women.

Another surprise came when Sister Perpetua, the Home Ec teacher of whom I was terrified because I couldn’t understand her instructions on how to thread a sewing machine, decided that I needed a make-over. Thinking that it wasn’t right for me to come to school in childish dresses with gathered skirts and bows at the back, she found in her secret coffers a tight skirt and an elbow-length angora sweater that instantly made me feel like a regular girl, as opposed to a foreign freak. American nuns, I concluded, were definitely a breed apart.

Last week, those nuns from my Alabama high school surprised me again. In the flurry of emails surrounding the sixtieth anniversary of our high school graduation, it was revealed that pock-marked Sister Caritas, the Math teacher—who frightened me with her logarithms and her jokes, neither of which I understood—used to find out which girls didn’t have a date to the prom and would get equally dateless boys to invite them.

Nuns playing matchmakers—who’d have thought? It makes me wonder what went on in the minds and hearts of those veiled and wimpled beings whose hair and ears and neck and body were shielded from our eyes. Because the body parts that were normally visible in lay women remained invisible in nuns, it made them seem disembodied somehow, ghosts with just a face and a pair of chalk-smeared hands. And because of this apparent incompleteness, we blithely assumed that most of the emotions that our mothers and aunts and grandmothers felt were unknown to the nuns, who were little more than teaching and praying machines.

How shallow and silly we must have seemed to them, we girls in our tight skirts, penny loafers and bobby socks, endlessly preoccupied with our hair and our dates or lack of them. I wonder if they saw their young selves in us. I wonder if they envied us, or if they counted themselves lucky to have become brides of Christ and turned their backs forever on the world of home perms, inopportune skin breakouts, garter belts, and prom-related anxieties.

Now that I need no longer fear them, I am touched by their understanding of our young lives, their acceptance of our budding sexuality. I am grateful to Sister Perpetua for realizing that I would never fit in if I continued to wear the little-girl outfits that my mother thought appropriate, and to Sister Caritas for her knowledge of the huge role that the senior prom could play in a developing personality.

I have in my time contributed to the volumes of writing by recovering Catholics about the scariness and weirdness of the sisters who taught us. Mea culpa, I say now, mea maxima culpa. Yes, they were strict. Yes, they enforced some odd rules, and they suffered no fools gladly. But it is high time I recognized that under those long serge habits and scapulars beat warm, intuitive, and womanly hearts.

*(All nuns’ names have been changed to protect their memories.) 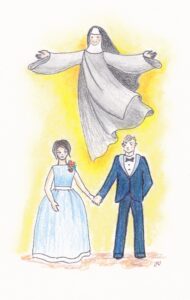