What’s not to like about baby birds? Chirping and bouncing around like fluffy ping pong balls, they flock to the feeder with their dads and consume vast quantities of suet and sunflower seeds. Most people find this a heart-warming scenario, but, reader, it drives me up the wall.

I’m referring specifically to juvenile purple finches. Or perhaps they are house finches—I’m the kind of birder who can only distinguish similar species if the birds are standing stock-still next to each other. I could try to identify them by their song. According to Sibley, purple finches sing plidi tididi preete plidi tititi preeer, which reminds me of a Rossini aria, while house finches merely emit “a varied warble,” whatever that is.

But no matter. The adult males of both species are purplish red on the head and chest, with beige and brown bits elsewhere. The females are little mousy striped affairs. And the babies, or rather, the adolescents—because by the time they come to the feeder they are a couple of weeks old, which is college-age for a bird—have dark beaks, and fluffy brown flecks all over.

They are, of course, adorable. But adorable is as adorable does, and I find their entitled behavior lazy and inconsiderate. Accompanied by their father, they perch on the feeder, but do you think they would bother to pick up a single seed? Not at all. Instead they shudder pathetically and flutter their wings and open their beaks as if they were still babies in the nest.

Most people would describe the sounds they make as chirps, cheeps, or tweets. But to me they sound like whines. “Feed me!” they insist. “Feed me, feed me, feed meeee!” They chirp almost but not quite in unison, so they sound  like sleigh bells on a trotting horse. A sweet sound, you say? Try hearing it non-stop all morning and afternoon, at top volume, so that I have to close the windows if I want to take a nap.

And what does the father finch do? He perches alongside his sons and daughters, waiting for them to assume some responsibility and pick up a seed. And when he can’t stand it anymore, he grabs a seed and stuffs it down one of those open mouths, which only drives the other siblings to complain louder. So he waits a bit, loses patience again, and stuffs another seed down another gullet.

I feel alternately sorry for and irritated by the guy. Hasn’t he heard of intermittent reinforcement? Doesn’t he know that by giving in he is only causing the begging behavior to become more entrenched? Hasn’t he heard about tough love? Yes, it would be hard to resist those pleas at first, but in the end both he and his descendants would be better off.

I used to hope that, while all this was going on, the mother bird was off somewhere having the finch equivalent of a quiet glass of wine. True, the male had regurgitated food into her mouth throughout the time that she was sitting on eggs. But laying and incubating eggs was hard work, and when the babies hatched she fed them by re-regurgitating the food that the male brought her. So I thought how nice it was that she was taking a break while her mate took the teenagers under his wing.

But it turns out that the mother finch does not limit herself to a quiet glass of wine in a nearby bush. While her husband is at my feeder with the kids, she is out actively recruiting another male to father her next brood. And how does she do this? She makes the one gesture that is guaranteed to reduce a male finch to putty: she flutters her wings, opens her beak, and whines.

Isn’t evolution weird? You’d think that those spoiled fledglings would never become self-sufficient. You’d think that male finches, worn-out by their children’s demands and embittered by their spouse’s betrayal, would give up on family life and embrace bachelorhood, and the species would die out. But far from it. Come by my house any June afternoon and you’ll see finch families flourishing despite their dramas. Don’t forget your ear plugs. 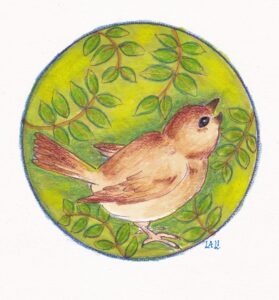 PrevPreviousNuns in Prom Time
NextTales from the Hive, Part 2Next