It’s laundry day, and time to change the sheets. My spouse and I do this together, in an efficient and, I think, graceful choreography that we have developed over the years. He fetches the clean bedding while I strip the bed. I put the old sheets in the washer: he stretches the bottom sheet over the mattress. Next come the his-and-hers duvets. He lays duvet #1 on the bed in the proper orientation and I spread the inside-out cover over it. He fastens the two ties on his side. I do the same on mine. Then we migrate in unison to be foot of the bed and, plunging our arms deep into the duvet cover, we turn the thing inside out. He holds the opening taut while I close the zipper. Then, using his superior arm strength, he gives a mighty shake and floats the newly-dressed duvet gently onto one side of the bed.

Repeat for duvet #2. When the pas de deux is over, we bow to each other and go our separate ways.

The bed-making ballet, which evolved spontaneously when we retired, is just one manifestation of the division of labor that began soon after marriage and accelerated with the birth of our daughters. He would change the baby while I set the table.  He carried the toddler and the backpack, and I the infant and the diaper bag. When the time came, he taught them to ride a bike and drive a car. I taught them to milk a goat, and irony.

After our children left for college, we became obsessed with ballroom dancing. Three or four nights a week, after work, we would meet at the studio for lessons or “free” dancing. Our approaches were vastly different. My husband viewed the task of leading us in a foxtrot across the floor as a three-dimensional puzzle to be solved, while I was happy to park my mind outside the door and let my body do the thinking. We did this instinctively, with very little talk, and after an hour of tangos and rumbas, sambas and quicksteps, we would leave the studio breathless but pleased with ourselves.

Fifty-five years after the Summer of Love of 1967, the choreography continues.  I put breakfast on the table; he brings in the vitamins tray. He feeds the birds; I walk the dog. I do the laundry; he does the dishes. In the grocery store, he buys the bulk nuts while I shop the dairy aisle; I bag while he pays, and when we get home he brings in the bags and checks the house phone for messages while I put away the food.

Is this energy-saving specialization a reward that comes to couples who stick together for the long run? Is it evidence that we are ancient, and pathetically set in our ways? Or is it a sign of some deep mutual attunement, a gift from the gods on our wedding day?

Speaking of which, on the Feast of the Assumption, a few days before the wedding, my parents and I went to Mass. As we were going home, my mother said that she had prayed for Ed and me. “What did you pray for?” she asked my father. “I prayed,” he answered, “that they will be good company for each other when fate starts raining blows on them.”

And rain they did. Eight months after the wedding, my father died. Then came the very real threat of the draft and Vietnam for my husband, miscarriages for me, and other vicissitudes. Mercifully, things eased up after a while, but blows did occasionally fall, and they still do (given our stage in life, they are even accelerating). But my father’s prayer on that pre-wedding day was answered, and we have been and still are good company for each other. 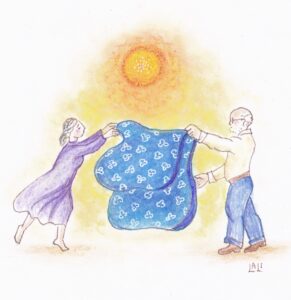