Some people meditate first thing in the morning. I spritz houseplants. I was going around the house the other day, spritzing and opening windows, when I saw, jammed against a corner of the sill and caught between the glass and the screen, what looked like a wad of dead leaves. Or perhaps—I didn’t have my glasses on—it was a cocoon of some kind. You know how cocoons can resemble bunched up leaves and random plant detritus. If so, I shuddered to think of the size of the moth that would emerge, since this “cocoon” was almost three inches long.  (I have been known to pick up garter snakes with my bare hands to move them from the middle of the road, but I flee from  moths.)

No sooner did the word “moth” leap into my brain than my right index finger, bypassing my frontal lobes, flexed and directed a spray of water onto the creature. Feeling a little ashamed of my reflex, and seeing that whatever it was gave no sign of life, I took a closer look. And I saw that it wasn’t a leaf or a moth, but was covered in dull rust-brown fur.

A mouse? If so, it was an upside-down mouse, because now I could see a rounded ear near the bottom of the thing, and at the other end a mouse-sized claw clinging to the screen. But if it was a mouse, even an upside-down one, why was Telemann, known to the local mouse population as the Scourge of God, sitting directly across the screen from the creature and totally ignoring it?

I went outside, got up close, and saw what looked like an extremely long arm, bent at the elbow and held tight against the little body. It was a bat! The poor thing had gotten caught between the glass and the screen when we closed the window the evening before, and had been trapped, terrified and in despair while we, also terrified and despairing albeit for different reasons, watched the evening news. Now I really felt bad about having spritzed it with water.

I didn’t want to move it or touch it or traumatize it any further, but the fact that it remained in a catatonic state did not augur well. But Nature, we are told, is nothing if not resilient, and by the time I got back in the house the windowsill was batless. Then I saw it, fluttering among the flock of ravenous little brown birds coming to the feeders for their breakfast, but utterly different from them in its flight pattern, which looked to me more kite-like than bird-like. And then it disappeared into the trees.

We once lived in a house beloved of bats. They mostly stayed in the attic, but every once in a while one would come downstairs, and my husband would catch it with a tennis racket and a cardboard box and put it outside. That was in the 1970s, when bats, because of rabies, were regarded mostly as a threat to humans. Now things have reversed, and the little brown bat (Myotis lucifugus, a mishmash of ancient Greek and Latin meaning “mouse-eared creature that shuns the light”) is grievously endangered because of our disrespectful behavior towards nature in general.

At least my little brown bat seemed to be in good health as he or she fled my windowsill, though he (or she) must have been ravenously hungry, having gone without a meal for almost twelve hours. This bizarrely bug-free summer does not bode well for bats in general. Moths and mosquitoes—of which little brown bats can eat as many as 1,000 an hour, or 4,000 in one night—are few and far between.

But it’s an exciting time of year for bats. Mating season begins in a few weeks, and I wish my little light shunner well. Little brown bats lead sexual lives as exuberant as a pop star’s, being both polyamorous and bisexual. If my windowsill bat is female, she will mate with several males before going into “torpor,” a form of hibernation. If male, he will mate with females and torpid males—who are presumably too drowsy to withhold consent—in an effort to make the most of things before the snow flies. 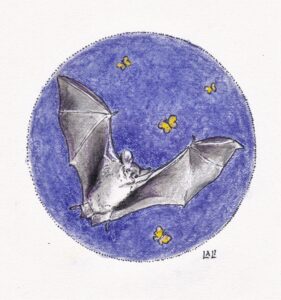