For as long as I can remember, I have wanted to lose ten pounds—this despite the fact that when I come across an old photo of myself, I am always surprised by how relatively svelte I look.  Yet at the time the photo was taken, I was convinced that I would finally be happy with myself if only I could lose ten pounds. Like a curse or an obsession, those ten pounds have haunted me through the years, regardless of my actual weight. I suspect that I am not the only one who feels this way.

I know that chronically feeling ten pounds overweight no matter what the scale says is not as profound a sign of neurosis as feeling, say, fifty pounds overweight. But it still seems a waste of time and emotional energy that, for years when I could have been pleased with my envelope of healthy flesh and spent my days thinking and doing  more interesting things, I instead fretted and sweated, giving up lunch, taking up running, and depriving myself of ice cream in order to get rid of those ten pounds.

Back in Intro to Philosophy I learned that, according to Kant, our view of reality is distorted by our perceptions. That made a deep impression on me, and I have been suspicious of mine ever since. I believe that the distortion is never greater than when we gaze into the bathroom mirror and it instantly morphs into a funhouse mirror. Where the self is concerned, observer bias takes on huge proportions.

Finally, after decades of doing guerrilla warfare against those clingy ten pounds, I have given up not on losing them, but on losing the wish to lose them. If I live to a hundred, I expect that I will be as shrunken, wizened, and bird-like as most centenarians, but will I for once be happy with my weight? Probably not. I won’t be surprised if I spend my last days fantasizing about how terrific I would look if I could only lose ten pounds.

Is there no end to this insanity?  Don’t tell me to work on loving my body as it is in the present moment. Don’t show me pictures of Rubenesque bikini wearers rejoicing in their spare tires. I carry the curse of my ten pounds like some Christians carry around the doctrine of original sin. Maybe that accounts for the contemporary fixation on fat. As morals have loosened and actions that would once have qualified as mortal sins are deemed perfectly natural and acceptable, we humans are still haunted by a feeling that we are not quite as we ought to be. If our self-regard, our ambitions, and our sexuality are no longer reasons to feel guilty, we can always project guilt onto our innocent bodies.

In this, paradoxically, we are not too far from those medieval ascetics who used to wear hair shirts and flog and starve themselves. In the updated version, we give up gluten, dairy, dessert, carbs, meat, and sometimes even food in general, and grimly commute to gyms where we pretend to climb mountains, row across bodies of water, and lift weights as heavy as our hearts.

I have been searching for strategies to rid myself of the ten-pound millstone that I carry not around my middle but around my psyche. I could throw my scale out the window, drape scarves over all the mirrors in the house, and carefully avoid accidentally catching sight of myself in store windows. But a more psychologically meaningful way might be to practice looking in the mirror with the same soft retrospective gaze with which I now gaze at photos of myself at thirty. After all, short of massive surgical interventions, I look better right now than I will even in the near future. It’s not too late to learn to accept the body that the universe is allowing me to enjoy today, but there is no time to lose. 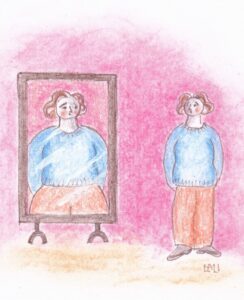