It Came in the Mail

I stopped practicing Catholicism in my twenties, and I sometimes forget how deeply I was marked by those decades of weekly, and often daily, mass and communion, of morning and evening prayers, the family rosary, and the “visits” to the Blessed Sacrament. So when a package arrived last week from a Catholic charity in Mississippi, I was not prepared for my reaction.

It was a padded envelope with “A Devotional Gift for You” printed on the front, and below that, cradled in styrofoam and visible through a plastic window…a crucifix. Not just a cross, but a cross with the body of the dead Christ on it. It was about three inches long, and no work of art. The figure looked like it was made of molded plastic painted gold, with little definition or detail. As is the practice with many charities, the “gift” had been sent in the hopes that once the object was in my hand I would feel obligated to send a contribution. But most charities confine themselves to sending address labels or small notepads. This was different.

What was I going to do with that cheap little crucifix? I already had a perfectly good one in my possession, a heavy metal one with a tastefully stylized figure of Christ that my mother gave me after my father died. As was the custom in Spain, the crucifix had hung over my parents’ bed, where it presided over my conception and birth. It now resides in the bottom drawer of my dresser, under my winter sweaters, where I placed it on the day in 1968 when my mother handed it over.

If I knew one thing, it was that I didn’t want to open that envelope. I walked around the house trying to think of someone who might like it, but nobody came to mind. Perhaps I could sneak into a church and leave it there, like an unwanted baby? Maybe I could recycle it, but how do you recycle a crucifix? Because I certainly couldn’t throw it in the trash. But why not?

Not feeling ready to explore that question I went to look for my spouse. Since he had had a more casual Catholic upbringing than I  (Catholic mother, Baptist father, public instead of Catholic school) I thought he might be able to dispose of the package.

“Can you do something with this?” I said, holding out the envelope with my fingertips.

“I don’t think it will go in the recycling,” he answered, looking at the crucifix.

“You mean throw it in the trash? I can’t do that!”

Apparently, no matter how light your Catholicism, the reluctance to throw away sacred images runs deep.

So here is what I did. I wrote the organization a note asking them not to send me anything else. I put the note and the envelope with the crucifix in a second padded envelope, sealed it, addressed it, took it to the post office, paid $4.75 to send it back to Mississippi, and drove back home, feeling foolish.

And yet….if you are inclined to smirk at my inability to throw away a piece of painted plastic in the figure of a man, try this experiment: find a photo of your mother or your child or your friend, take it out of its frame, and imagine (don’t actually do anything, just imagine) tearing it up, or gouging out its eyes. Impossible, right?

And yet you and I both know that tearing or defacing the photo of a loved one will in no way harm that person. Still, I can’t imagine doing it, except perhaps at gun point. Thinking of it this way, I feel slightly less embarrassed about my reluctance to throw away the crucifix. And it confirms me in the notion that, deep inside our Cartesian, Newtonian,  postmodern being there lurks a powerful primitive, adorned with feathers in her hair and necklaces of shells and bones, who is uneasy in the dark, feels restless during the full moon, and believes that an image may be more than a merely visual link to the being it represents. 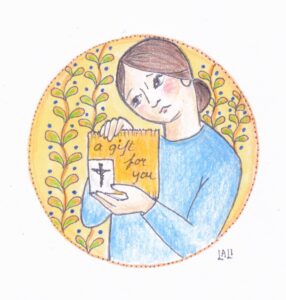