There is one population for whom, despite the ravages of time, I remain irresistible: I’m talking about bugs.

Their fondness for me goes back a long way. “Mother of God!” my mother would wail, lifting up my shirt and calling her sisters to witness. “They have eaten her alive! Alive!” She was referring to the fleas that belonged to the two German Shepherds that belonged to the French couple—he was bald and played the cello, she was elegant—who lived in the apartment above us. The dogs would ride in the creaky birdcage elevator, leave some fleas behind, and when I came home from school the fleas would jump on me as the elevator made its stately ascent to our floor. They would not jump on the maid who had come to fetch me, or on my mother, my father, or my aunts. I was their preferred buffet, and when they were done they would leave behind extravagant tips in the form of quarter-sized, itchy welts that I scratched until they bled.

It’s always been like this. My husband’s grandparents had an elderly, blond Pekingese named Chang whom they adored. Chang had fleas, fleas that didn’t seem to bother him much and that had never bitten either Clifton or Ruby Violet. But as soon as I came in the door, Chang’s fleas would rush slavering to my legs. You could practically hear their little squeaky voices crying, as they latched on, “At last, here comes a real meal!”

That was back when dogs still had fleas. Now, thanks to various supposedly safe insecticides, most well cared for dogs are flea free. But that doesn’t mean that I am short of arthropod admirers. In late spring, black-fly season here in Vermont, I go around looking like those tormented images of the crucified Christ, with rivulets of blood snaking from my hairline down to my collarbones. Want to go for a hike but worried about mosquitoes?  Leave the Deet and the herbal sprays at home and take me along instead. You don’t even have to bother with rolling down your sleeves and tucking your pants into your socks. Like the homecoming queen at the dance, I will be the center of attention, and mosquitoes, wasps, gnats, noseeums, and bees both honey and bumble will zero-in on my skin from all points of the compass and leave you, an ignored wallflower, to enjoy your hike in peace.

There seems to be no end to the fascination I exert on the six- and eight-footed denizens of the woods. I have even had scabies, which is caused by the sarcoptes mite. The mite burrows under the skin, where it carries on its disgusting life cycle while causing intense itching and welting. I have had this plague not once, but twice, and been the only one in the house so afflicted. To a mite, I am even more tempting than a dog. As for ticks, yes, I’ve had those too, both wandering and attached, but no Lyme yet.

The fact that I wear a lot of black may have something to do with this fatal attraction. I can remember one extraordinary occasion when, standing in a cloud of mosquitoes on a humid summer evening, I was left almost entirely alone. I was wearing a white shirt, and the woman I was next to was wearing black, and those mosquitoes were crazy about her. Perhaps hair color has something to do with it? My spouse, my dog, and my cat all have lighter-colored hair than I do. If that is what protects them from bugs, I can’t wait for my hair to turn completely white.

Despite my complaints, I can’t say that the passion that I arouse in insects disturbs me too much. It’s always nice to be desired, and besides, the notion that all these creatures regard me as a source of sustenance, something that will enable them to prosper and reproduce makes me feel a part of the great chain of being. Heaven knows how much I take from the planet, in terms of animal flesh, water, fossil fuels, and so on. Contributing an occasional drop of blood to the welfare of another being seems like the least a human can do. 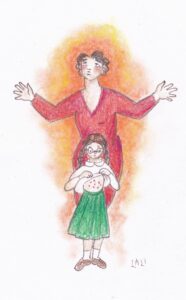