I once worked in a cancer lab. My coworkers and I injected mice and hamsters with cancer cells, dosed them with various drugs, weighed each animal, measured its tumor as it grew, and recorded its date of death. It was appalling work. The stench of the place was so strong that every day upon coming home I had to throw my clothes in the laundry, and take a shower and wash my hair. The horror of all that animal suffering clung to me along with the smell, except that unlike the smell, it didn’t go away in the shower.

To take those bright-eyed, innocent beings, inject them with cancer, and watch them suffer for days felt like more than I could stand. As a scientist, though, you were supposed to be tough and unsentimental, especially if you were female. And we were still under the pall of Descartes, who, three centuries earlier, had declared animals to be mere machines.

I didn’t quit the job, but I devised a little program of euthanasia. Whenever I saw an animal in extremis, sometimes with a tumor as large as its entire body, I would break its neck with a large pair of forceps. But my acts of mercy were messing up the statistics, and I was told in no uncertain terms to let the animals die in their own good time, and only record, not hasten, their deaths.

For a while, the work was almost unbearable. But the other lab assistants, recent college graduates like me, were doing it too, and seemed seemed o.k. with it. At lunch the conversation was about movies and dates and plans for the future—never about the suffering beings around us. And so with time I began to join in, and before I knew it, I was going through the motions of the job, weighing and measuring and injecting while thinking about other things—how to wear my hair, what color to paint my nails—oblivious to the warm, breathing, miserable little creature in my hand.

The protocols demanded that, once all the data had been collected, the remaining live animals be “sacrificed.” In the case of mice, this meant dumping them into a trash can containing dry ice.  I have a clear memory of decanting entire cagefuls of wiggling mice into those containers, where they quickly suffocated in the CO2 fumes. The first time I had to do it I almost passed out. But after a while, to my amazement, I managed just fine. I was, after all, only doing my job.

It wasn’t until I was safely in graduate school that I realized the implications of those months in the lab. If I could go from compassion for the animals to calm acceptance of the procedures we inflicted on them in only a few weeks, what other cruelties might I be capable of? As the moral high ground began to crumble beneath my feet, I saw that I could never again feel certain of what I might have done had I been, for example, an SS officer in charge of a concentration camp, or an American infantryman in the jungles of Vietnam.

We live in a judgmental era. Every news segment is an invitation to cast blame. Who are these people, so corrupt, so cruel, so self-seeking? But thanks to those hundreds of mice and hamsters who once suffered at my hands, I wonder how I might have behaved if I had been born with the same set of genes and brought up by the same parents as, say, the Orange One. And while this doesn’t make me like or approve of him, it does open me to the possibility of  compassion.

Here is Desmond Tutu, on the roots of compassion and forgiveness:

I know that, were I born a member of the white ruling class at that time in South Africa’s past, I might easily have treated someone with the same dismissive disdain with which I was treated. I know, given the same pressures and circumstances, I am capable of the same monstrous acts as any other human on this achingly beautiful planet. It is this knowledge of my own frailty that helps me find my compassion, my empathy, my similarity, and my forgiveness for the frailty and cruelty of others. 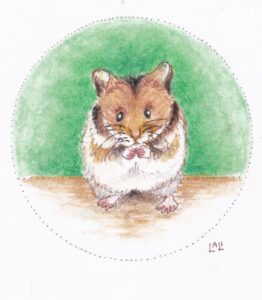 PrevPreviousTrills and Other Thrills
NextIt Came in the MailNext