Sir Ed and the Xfinity Lady

My spouse puts the cell phone on speaker and dials Xfinity. I hover nearby, wringing my hands, prey to the anxiety that comes over me whenever we need to contact the invisible entities that control our lives. Today’s phone call has to do with the static in our land line that has dogged us for months. (Yes, we still have a land line. We are very ancient persons.)

The Xfinity Lady answers in a voice that has been carefully trained to convey, in timbre and tone, the assurance that we are in good hands. She is not alarmed when she hears about the static in our land line. “I can help you with that!” she says. She is speaking with us from somewhere in the Antipodes, and as she asks my spouse for his name, address, and phone number, I can almost hear the thunder of the Pacific , or perhaps it is the Indian Ocean, in the pauses between her sentences.  Her English is impeccable, albeit with a tinge of je ne sais quoi. But excellent, really.

And then she says to my husband, “Now, Sir Ed, please to wait patiently while I do some checking.”

I clap my hands over my mouth, hoping that the giggle that has escaped me sounded to her like a seagull swooping over the waters that divide us. And, just like that, all my apprehensions disappear. Forget about the static. I only want to hear her say “Sir Ed” again.

She does not disappoint. Now that she has his name, she uses it faithfully at the beginning of each sentence, having been told in her training that no sound is sweeter to a customer’s ear than that of his own name. She asks Sir Ed how long the problem has existed. She dials the land line and begs Sir Ed to tell her if it has rung. Finally, she wonders if Sir Ed might be at home on Sunday morning, between 10 and 12, for one of her technicians to come to fix the problem. Then, having ascertained that there is nothing else she can help him with, she wishes Sir Ed a good rest of the day and bids him goodbye.

I am not making fun of the Xfinity Lady. But her knighting of my husband has unleashed in my brain a fantasy about her. I imagine her dressed in silks, sitting straight and solemn like a priestess at her keyboard. Her skin is brown, and her hair is long, dark, and lustrous, and smells of coconuts.

Going back in time, I see her as a skinny twelve-year-old in a polyester navy-blue uniform, excelling in English class. She memorizes vocabulary and practices her pronunciation, rolling the words around in her mouth like candy. At the end of the day she skips home, muttering “Little Miss Muffet/sat on a tuffet/eating of curds and whey.” Tuffet, curds, and whey are mysteries to her, but she gets the part about the spider (the spiders that come into her mother’s kitchen are the size of a man’s hand).

By the time she finishes secondary school she has read Twain and Dickens. She makes her way to the city, where a letter of recommendation from her English teacher gets her an interview at Xfinity. She aces the tech aspects of the training. Though her vocabulary outstrips that of her fellow trainees, her English retains the stilted character of someone who has learned it from books. But she is proud of it, and at night she downloads the great Victorians, her favorites, on her computer–Trollope, the Brontes, even Henry James.

And now here she is at work, helping Sir Ed, who lives on the snowy shores of Lake Champlain (which she knows is practically the North Pole). She is patient and cheerful, and remembers to include the honorific that she learned from her favorite authors. But she cannot figure out why, every time she addresses this customer by name, she hears in the background an explosive gargle, halfway between a splutter and a squeal, reminiscent of the mating cry of the purple gallinule (Porphyrio porphyrio) that haunts the forests of her country. 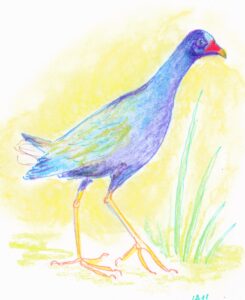