Tales from the Hive, Part 2

For weeks on end, the bees ignored me. Every afternoon I would walk to the community hive across from my house. Creeping slowly to the side of the hive, staying well out of the bees’ flight path, I would decant half a cup of fresh, clean water into their little water dish. I did not wear my bee suit, as it took much longer to put in on than it did to pour the water. Besides, in my heart of hearts I was hoping that a bee would land on my bare arm and make friends.

But the bees paid me no attention. Neither friendly nor unfriendly, they went about their business with the indifference of a cat who goes on grooming its nether regions as if its owner hadn’t just walked in the house. Then, on a warm afternoon last week, I sidled up to the hive, crouched by the water dish and, as I was picking the usual bee casualties out of the dish, I noticed that an unusual number of bees, in an unusually excited state, were teeming and crowding around the entrance of the hive. They were humming and buzzing and thrumming so that the afternoon air seemed to vibrate in synch with their bodies and their voices.

I squatted there, empty cup in hand, lulled by the sound and the sweet smell of warm grass. And then I became aware that a single voice had detached itself from the chorus and was doing a solo near my ears. I stood up, blinking, and saw that the singer was orbiting my head. “I should probably get out of here,” I thought.

Every hive has a number of guard bees, whose job is to keep intruders away. I assumed that as I stepped away my bee would understand that I was leaving, and return to the hive. But she kept after me, like one of the Furies who pursued Orestes after he murdered his mother. As an apprentice beekeeper I felt it beneath my professional dignity to swat at her or break into a run, so I made my retreat at an outwardly relaxed pace, which took considerable self control. Meanwhile, the bee stayed at my heels, so to speak, exactly like a short-legged but angry Corgi who once drove me out of his yard.

I crossed the street, and then my front yard, with the guard bee drawing imaginary haloes around my head. Whispering curses in my ear, she followed me to the porch, and I wondered what would happen if she flew into the house. But when I opened the screen door the buzzing stopped, and she was gone.

What was behind this encounter? I had not made any sudden moves, or eaten a banana (bananas smell like the alarm pheromone and make bees aggressive). Perhaps the heat had something to do with it. When the master beekeepers visited the hive the next day they found that the bees were reproducing so quickly that they were about to outgrow their space. Crowded bees are likely to swarm, so the beekeepers added a new apartment (technically known as a “super”) to the top of the hive. They also tested for the dreaded Verroa mites, and only found a single one, which is practically a miracle in the bee world these days.

So all is well in the hive. So well in fact that we may attempt to extract some honey in a few days. I’ll be sure to wear my bee suit for that. (To be continued.) 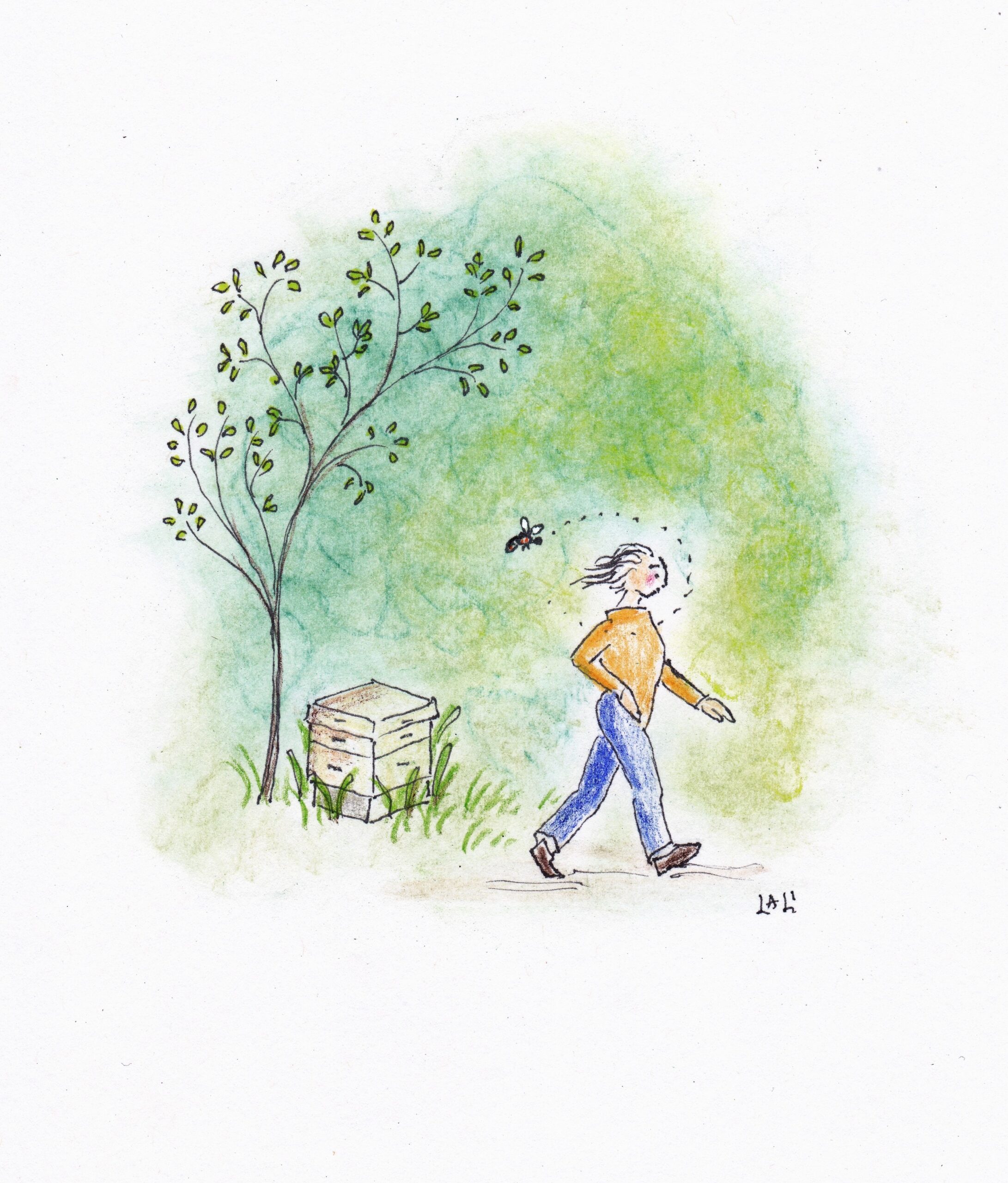