Perhaps it is not a coincidence that my earliest memories of my musician father have to do with sound. Here they are in chronological order, from early infancy to toddlerhood:

The Lip Trumpet. I am in my mother’s arms. My father comes home, puts down his violin, takes off his winter-smelling hat and coat, kisses my mother, and with his lips almost closed blows forcefully into my neck, making a trumpet squeak that is as sharp as the feel of his mustache on my skin. I scream with delight, and he does it again. Not surprisingly, the neck becomes for me a significant erogenous zone.

The Watch. Round and flat as a María biscuit, the gold Omega pocket watch once belonged to my grandfather. Every day when my father dashes home at noon from orchestra rehearsal, he puts it on the table next to his plate, announcing, “I have five minutes to eat!” before he must rush off to teach at the conservatory. Now I am sitting on my father’s lap. He rests his cigarette on the ashtray and with his long, tobacco-stained fingers draws his watch out of the funny little vest pocket where it lives. He lifts the lid, which is as thin and delicate as a communion wafer, and puts it against my ear: escolta, he says—listen! And I hear the metallic ticking, like a kind of cricket, and smell the sweet-acrid cigarette scent of his fingers on my face. “Did you like it?” he asks, and slides the watch back into its little pocket.

Pizzicato. Slowly and carefully, as if it were a baby, my father takes his violin out of its case. I toddle into the room and he bends towards me. “Vine, nena,” he says. “Would you like to do a pizzicato?” Propping the violin against his knee, he shows me how to pluck the D string, which is a dull yellow color and was made, I’ve been told, from the gut of a cat. I push my finger against the string, but nothing happens. “You have to lift it a little, like this,” he says, and demonstrates again. I curve my index finger and place the tip under the gut of the cat, lift, and hear the low, dull ping as the string snaps back. “Excellent,” my father says, “now you know how to do a pizzicato. And now I must practice.” I float out of the room, filled with pride, not so much at having produced the pizzicato, but at having become, for a fleeting moment—my mother is in the dining room, talking to her sisters—the focus of my father’s attention.

The Beethoven. My period of toilet training coincides with my father’s preparation to play the solo part of Beethoven’s violin concerto. This being one of the major pieces of the repertoire, I must have first heard it when I was in utero, but with my father’s performance date approaching the frequency of my exposure has recently increased. And so it is that one day my mother finds me seated on the teapot-sized china potty (chairs with a bowl insert apparently not having been invented yet), passing the time by humming the staccato hunting theme of the third movement.

After his death, both my father’s watch and his violin came into my possession. Years later, I had the watch repaired and gave it to my grandson, who has never worn a vest and probably never will, but who I hope will keep the watch as a symbol of his membership in the male Benejam lineage. The violin, with the worn spot on its “shoulder” where my father’s hand rested in the higher positions, went to my granddaughter, and served her well during her student years.

Of the third movement of the Beethoven concerto nothing tangible remains, only my ability to replay its jolly rhythms in my mind and feel the bow’s bite in my flesh—the places where, more than in gold or wood, the past lives on with all its warmth and color. 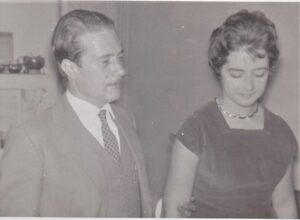