The Work of a Lifetime

In my recent apprenticeship as a beekeeper, I have learned one fact on which I’ve been dining out on for weeks. “How much honey does a single worker bee produce in her lifetime?” I ask my my friends around the table. “A gallon!” says one. “Nah, that’s too much. One cup,” says another. “A pint?” offers a third. I shake my head and let fall a pregnant pause.

“One-twelfth of a teaspoon!” I announce triumphantly.

Amazement ensues. “That means that when I put a teaspoon of honey in my tea,” a mathematically-inclined diner muses, “I’m using up the entire life’s work of twelve bees!” And an inward look comes over our faces as we each silently resolve to be more mindful and appreciative of every drop of honey we consume from now on.

I have been thinking about that twelfth of a teaspoon since I first heard about it. So much work for such puny results! Every time a worker bee leaves her hive to go foraging, she visits between 50 and 100 flowers, and her nectar-collecting flights total an average of five hundred miles. After which, having made her wee contribution, she dies from exhaustion.

If there are existentialist philosophers among the bees, do they ponder the gratuitousness of bee existence? All that effort to collect nectar to turn into honey to feed baby bees who will then wear themselves out collecting nectar to make more honey to feed more bees! The French commuter’s complaint, métro, boulot, dodo (metro, work, sleep), sounds plain self-indulgent compared to the implacable discipline of the worker bees, who can’t even look forward to going south for the grandes vacances in August.

And yet, have you ever seen a depressed bee? Is there a jollier sight on a sunny day than a humming, bee-filled flower bed or tree? Dressed in their little black-and-yellow striped outfits, worker bees purr as they zoom intently from bloom to bloom, as if there were nothing they’d rather be doing than exactly what they are doing. Watching them, I am reminded of Mihály Csíkszentmihályi‘s description of the artist in a state of flow, fully focused and energized by her absorption in an enjoyable task.

From Aesop to the present, bees have been held up as examples of industriousness, collaboration, intelligence, and selfless devotion. The fact that from childhood I found these fables tedious isn’t going to keep me from indulging in a bit of bee-based moralizing of my own, as follows.

Having read the existentialists at an impressionable age, I am prone to occasional fits of absurdist despair. This happens especially when I am awake in those dire pre-dawn hours, the time when our primitive ancestors would creep closer to the fire and listen with dread to the howls of approaching predators. I look upon my life, including my blogging life, and think, for crying out loud, what am I doing? Is this how I want to spend the remaining years of my one wild and precious life, writing tiny pieces and drawing tiny drawings that take time and effort that would be better spent doing something else.

Some days I feel—and I know I’m not alone in this—as if all my work put together amounts to no more than a fraction of a teaspoon. And yet, thinking of the bee—who probably doesn’t think, or not about existential questions anyway—it occurs to me that if one can add one-twelfth of a teaspoon of sweetness to the universe, by making art or science or growing a garden or feeding a child, that’s not such a bad thing. Especially if one is not subtracting from the universe’s well-being in other ways.

So we might do well to emulate Sister Bee and focus ardently on the work for its own sake, filling the air with our contented buzz as we mindfully gather what drops of nectar we can find. 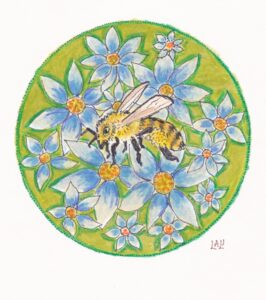