Among the pleasures I have given up lately, along with coffee, hot peppers, and red wine, (yes, this is going to be a whiny post), is shopping for clothes. It used to be one of the small joys of my life to wander into the nearest T.J. Maxx and extract from among the racks of unwearable stuff  (too small, bad color, too small…) some terrific piece that had been ignored by less alert shoppers.

When I was growing up, my mother could let down the hems of my dresses only so many times before she had to take me to the dressmaker to be measured for new ones.  And in my twenties and thirties my clothes had to be periodically replaced because of ingrained baby-food stains, or moth holes, or tears caused by my rushing too close to door handles (those were my rushing-around years).

But now my closet is full of elderly outfits: the red fleece-lined parka that I bought in preparation for moving to Vermont in 2004, still perfectly good despite the tough winters it’s endured; the fake-fur-lined boots that I purchased on the same occasion, though there is now a small dent in the sole of the left one; and, most venerable of all, the white polyester poncho bordered with a long fringe that my mother crocheted for me in 1971. I may well be buried in that poncho, but I am more than a little bored with the parka and the boots and other relics of times gone by. So I was delighted the other day to see a worn spot in the inseam of the green pants that I had owned for fifteen years. The damage was beyond my mending skills, so at last I had an excuse to go shopping.

But the fact that I needed a new pair of green pants did not ease my scruples. After all, I had other pants in my closet, and a green pair was hardly crucial to my survival. Over the last decade or so I have become depressingly aware of how damaging the clothing industry is to the environment. The thought of petroleum-based, microplastic-spewing polyesters, of thousands of acres of habitat being converted to water-and-pesticide-dependent cotton fields, and of rivers in China flowing rainbow-colored from fabric dyes makes me feel the way I do when I smell bacon and reflect on the life of pigs in America.

That’s it for the whining portion of this post. The cheerful part is that I have found, in an old, yellow frame house five minutes from where I live (much closer than T.J. Maxx!), a guilt-free source of new-to-me outfits–a second-hand clothing store that takes in donations, cleans and sorts them, and gives the proceeds of their sales to a local charity. It’s a small and friendly place, and I know that if I find something that I like in my size, I can probably afford it.

I went there looking for my replacement green trousers and also found a top in a barely-there shade of pink, and a linen shirt that made me think of the blue of the Mediterranean sky. The pink top looks brand new, but the linen shirt looks like it’s been through the wash a few times. But it has a homey feel, and besides, I’m used to wrinkles these days. Forty-five minutes later I emerged onto the store’s rickety porch with my purchases and a receipt for $40, and that good feeling you get when you get your cake and eat it: new clothes, and a mostly clear conscience.

Oh, and the pants: the only green ones in my size were a pair of hiking pants from REI. They have more pockets and zippers than I can count, and they swish loudly with every step I take. They look indestructible, and will probably still be knocking around the planet after my bones have turned to dust. Hiking pants are not exactly what I had in mind; but this being Vermont, I can wear them for maple sugaring or to the symphony, and nobody will bat an eye.

At least they’re green, and in more ways than one. 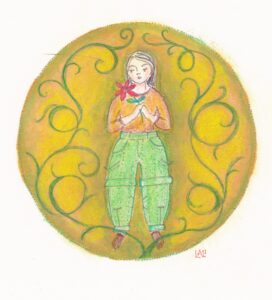