Register For My Latest Posts:

The Birds Are Back!

It almost broke my heart, this past July, to take down my bird feeders. A bear had been seen entering our community, and although I would personally have welcomed his visit, I couldn’t risk giving my neighbors a fright. The birds were, to put it mildly, upset. In addition to sunflower seeds, they had been consuming a suet cake every day and a half, and now the bonanza was gone. For 24 hours, with their fledglings in tow, they fluttered around where the feeders had been, and it was all so heartbreaking that I had to lock myself in the bedroom, where I couldn’t see or hear them. By the next morning, they were gone.

For the rest of the summer, our backyard felt like something out of Rachel Carson’s Silent Spring. Sure, there was the grass and the hostas and the bushes and the trees, all busily signaling and chatting with each other via fungi and rhizomes and whatnot, and the ants and spiders and pill bugs were also there, sending messages in their own dialects. But I don’t speak botany or entomology. As far as I was concerned, the yard was a dead zone–no singing, no fluttering, no chirping, no dramas over dominance or mates. Even the squirrels were gone. The only visitor was a lone chipmunk who came to drink from our birdbath at four o’clock every afternoon. The cat Telemann, who used to spend hours on the windowsill lashing his tail and swatting at the glass, went into a depression, as did I.

But now that the days are getting shorter, bears are getting into their autumnal torpor, and those that are still  about are finding plenty of berries and apples to eat, so my spouse and I filled the feeders and put them out again. “Want to bet how long  it will take the birds to find the feeders again?” I asked. “One hour,” he said, ever the optimist. “Ha! How about a month?” I scoffed, thinking about bird-brains, etc.

Reader, he was right! Within one hour the feeder was swinging under the assaults of a mob of chickadees and titmice. Who were these birds, and where had they come from? Had they spent the last three months hidden in the treetops, waiting for the feeders to reappear? Were they the parents who had nested nearby in the spring and fed their babies from our bounty? Or were they the nestlings, now grown up, who had heard about this horn of plenty from their mothers and fathers?

The chickadees and titmice were followed by the nuthatches and one downy woodpecker. So far, the red spot on the back of the downy’s head is the only bit of color in a sea of discreet bluish grays and blacks. By the time the goldfinches hear that the restaurant has reopened, their plumage will have reverted to the olive drab of winter. The more sensational-looking birds–the orioles and the rose-breasted grosbeaks–won’t appear until next spring. But I don’t care about color or exoticism. I would even welcome a pigeon or two. I care about the spectacle of life–flapping, tweeting, busy, lively life.

And the feeders allow me to indulge in the illusion that, by buying huge bags of seeds and suet by the case, and putting a heater in the birdbath so the water doesn’t freeze, I am playing an important part in keeping all that life going. With the possible exception of the birdbath, I know that this is just a fantasy. For eons, birds flourished without being fed by people. I would probably do more good by donating the money I spend on seed and suet to some environmental organization, or to the campaigns of green-minded politicians.

And then there is the mystery illness that has been killing song birds on the East Coast. Fortunately, it hasn’t spread to Vermont yet, but people in the affected states have been asked to take down feeders and baths. Unless the cold weather puts an end to the virus or whatever it is that is killing birds, it’s only a matter of time before the disease arrives here, and then of course I will remove my feeders and birdbath, possibly for good. In the meantime, however, I will feed and watch and rejoice along with the cat Telemann, and pay for my possibly irresponsible pleasure by sending a modest check to the Audubon Society. 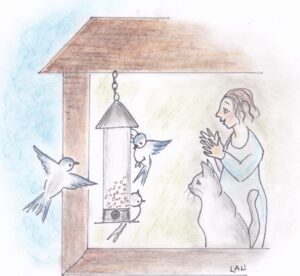