Of Shoes, the Season, and the Sea

Those who know such things have advised me to replace the ballet slippers that I often wear for walking with something more supportive. I can use all the support I can get these days, so I have been searching for shoes online, and have found many that match my requirements in color (brown, because I already have a black pair), style (whatever won’t make my feet look like aircraft carriers), and even supportiveness. The trouble is, none of those shoes are in stock.

I know exactly where my shoes are: they are in one of the dozens of container ships rocking placidly in the filthy waters off the port of Los Angeles. They may even be in the very ship whose anchor severed the pipeline that poured a gazillion gallons of oil into the  waters off Orange County. I think about those ships and that pipeline while I troll the web in search of brown shoes. I think about the dead fish lining the beaches, the dolphins swimming through the toxic gunk, the oil-covered shore birds pecking at dead fish on the sand. 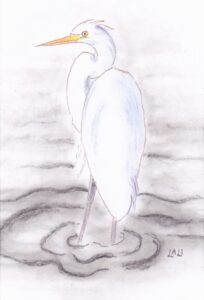 The container ships are stuck because there aren’t enough truckers to get the goods across the purple mountain majesties, amber waves of grain, and fruited plains all the way to me in Vermont. And the bottleneck is getting worse because consumers are consuming at unprecedented rates, so every day more ships join the queue, loaded with all the wonders of the Orient, many of which are made of plastic.

I really want that brown pair of walking shoes, but do I need it? I do not. I can wear my brown suede hiking boots, which may not look great with anything other than jeans but will give my feet the support they crave. Nor would it kill me to wear my black walking shoes with non-black pants. And so a part of me thinks it’s a good thing that the shoes I want, along with trillions of other nice-to-have-but-not-essential products, are out of my reach.

It wouldn’t do me and the rest of America any harm to go on a consumer diet, especially as Halloween approaches. Have you seen those ten-foot skeletons (made of you-know-what) that some people are already putting on their front yards? They are driving their neighbors crazy, not with disgust but with envy, because the stores have already run out of them. Why can’t we have a Halloween that doesn’t depend on stores, truckers, or container ships? Why not replace those instant-gratification plastic pumpkins with the kind that grows on a vine and has to be carved by hand? You can even throw their stringy innards  on your compost pile and you’ll have your own pumpkin patch next fall.

Are these the ravings of a pre-Xmas Scrooge? Who am I to deny my fellow citizens the innocent pleasure of studding their yards with the hideous emblems of the season? The trouble is, in our technological age there are no innocent pleasures, or very few. You can’t have the ten-foot plastic skeleton without the container ship that carries it, or the off-shore rigs that extract the petroleum from which plastic is made. And when Halloween is over, the skeleton and the fake pumpkins and spiders and costumes will end up in the local dump, where they will last for eons, or in the Great Pacific Garbage Patch, which is 4.5 times the size of Germany and floats not too far west of those container ships.

So going on a bit of a consumer fast might not be such a  bad thing for us, children included. But I have to admit that, like Saint Augustine, who prayed “Lord, make me chaste, but not yet,” I have still to begin my fast. Since I started writing this, I found the perfect pair of brown shoes, and they should arrive by the weekend. After that, I’ll go on a serious consumer fast.