It’s like coming home. After a two-year, pandemic-related hiatus, I’m back on the mat, and in my body.

I remember my first yoga class, twenty-five years ago. I thought the instructor was crazy. “Breathe into your hips,” she would say. What? How? “Let your belly expand” she would intone. The belly? Didn’t she know were weren’t supposed to have bellies, had spent most of our adult life trying to obliterate our bellies? Yet here we were supposed to embrace our belly, and let it be itself.

And then there were the toes. In all my years of gym, aerobics, etc. nobody had ever mentioned toes. Except when I stubbed one, I thought about my toes as quasi inert appendages dangling from my foot. Sometimes, as a party trick, I would use them to pick up a pencil off the floor. Now this teacher was telling me to pay attention to my toes, to interlace my fingers with them and spread them apart, to give them gentle tugs and, standing up, to lift them in the following sequence: little toe down, big toe up; big toe down, little toe up; and finally the almost impossible, big and little toes down, middle toes up. I noticed that as we stood and tried to make these moves, everyone’s fingers and thumbs moved in synch with what they were attempting to do with their toes.

Over the years, yoga-speak began to make sense. Somehow I could breathe into my hips, my shoulders, and whatever part of me was “resisting.” I even developed a sense of where my diaphragm was, and what it was doing. I learned to properly stack my shoulders, hips, and knees, and I became aware of my posture, sometimes even while I was standing in line, or watching TV. And I came to perceive my toes as helpful parts of my anatomy, deserving of care and respect.

In the early days, I was acutely aware of everyone else in the class. My observations, though I kept them to myself, were not kind. Here was X, bending forward in triangle pose, instead of sideways as if she were between two panes of glass. If Y didn’t have good enough balance to hold tree for more than two seconds, why didn’t she hold on to a chair? And I was competitive. If Z could squat with her heels on the floor, I pushed myself to do it too.

But as I became familiar with the poses, and gradually learned to focus on what was going on in the hitherto unexplored realms of my muscles, joints, and viscera, I stopped paying attention to what others were doing or failing to do. I stopped showing off. Eventually, I found myself doing large parts of the session with my eyes closed.

All this came to a halt during the pandemic. My attention, which I had with years of practice trained to roam in the nooks and crannies of my anatomy, rushed back to my head and lodged itself firmly in its original home, the frontal lobes of my brain.

Last week I made my way back to yoga—slowly, carefully, and gratefully. Some poses were more challenging than I remembered, and my balance was precarious, so I kept a chair nearby, but for the entire session I was fully in my body, and did not once think about wars abroad or gross injustices at home. That skill, which had taken so long to acquire, had not deserted me.

Rolling up my mat at the end of class I wondered, how did previous generations, before the coming of yoga to the West, deal with aging? The day must have come in their sixties or seventies when they could no longer reach their toes, or stand on one foot, or get up off the floor. For us, thanks to yoga, those losses don’t have to come so early. And when pigeon pose and downface dog are no longer possible, our generation will transition from floor to chair to, who knows, bed yoga, and hold on for as long as we can to that precious teaching from the East—the ability to inhabit our bodies. 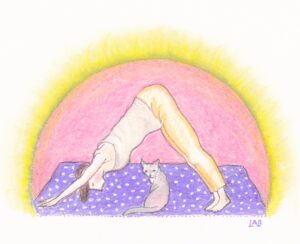