Between my face and my book there is, almost always, a cat. He is gray, with white chest and paws, and his name is Telemann. Since I am usually horizontal when I read, my upper chest offers a perfect landing spot for him. And land he does. He doesn’t sidle up, or walk the length of my body up to the desired spot, or announce his presence in any way. Instead, he materializes out of thin air, and wham! lands with his four feet on my ribs. This is especially annoying when it’s late afternoon, the book is kind of boring, and my eyes have just started to close.

It wouldn’t be so bad if he would then settle down, but the sudden landing is only the beginning. First he turns around six or seven times, tail high and rosy derrière barely inches from my face. After that comes the bopping—or “bunting,” as the action is known in cat circles—which means that he tucks in his chin and bops me hard on the nose with his forehead.  After rubbing his cold wet nose against the tip of mine, he licks the spot with his raspy pink tongue. Finally, if I stay perfectly still, he settles down, blinks slowly, ignites the purring engine, and kneads whatever part of me he can reach.

Leap, land, turn, bop, knead. I know, because I’ve googled them, that these are all signs of cat affection. They are also indications that the cat recognizes you, considers you part of his territory, and marks you as such with the scent glands on his head and muzzle. “I love you very much,” he is saying in cat language. “I remember who you are, and you belong to ME.” I found the idea of being marked as a cat’s territory unsettling, until it occurred to me that we humans also like to put our imprint on our beloveds, with marks ranging from hickeys and heart tattoos to bindis and wedding rings.

Telemann has an extended version of the love and marking ceremony that he reserves for night time. As I lie in bed, book in hand, he launches into his rites with the solemnity of an archbishop. But now the turns are more numerous, the bops harder, the licking more intense. He spreads his ten fingers wide apart in anticipatory ecstasy. I can tell that he would like to knead my cheek, but considerately makes do with the duvet instead.

I do love the guy, and I understand the meaning of all this, sort of, but he already told me that he loved me and I was his and only his earlier that afternoon on the sofa. At times like these, his bold neediness can be hard to deal with. I wish he would read my moods better. I wish he could accept that sometimes a woman just likes to be left to read in peace.

But then I remember the other times, when he’s napping or looking at birds or trying to kill squirrels through the glass sliding door, when he ignores me for hours. Times when he’s going to do what he’s going to do no matter what my own needs and desires might be. Do I want a cuddle? Too bad. He’s busy chasing invisible motes of dirt.

And so, lying in bed, holding the book up high so I can see it over his body, I let him go through the ritual from beginning to end, because in the back of my mind I suspect that I need him—his ever harmonious poses,  the way his whiskers stick way out of his plump upper lip, the lazy blinks of his green-gold eyes—more than he needs me, and that if I move him out of the way he might take offense and decide that he doesn’t like me after all.

I know that if Telemann were a man, letting him walk all over me like this would be a disastrous strategy, but what are the dating rules when the partner who is literally walking all over me is an eleven-pound furry creature with claws? I need somebody to write a self-help book, perhaps entitled Women are from Venus, Cats are from an Alternate Universe, so I won’t end my days as the pathetically insecure girlfriend of a cat. 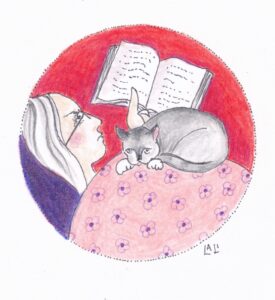