Habits of the Home

In all the years I lived with my parents, I never once saw my father in a robe or in pajamas. Every morning he would emerge from the bedroom fully dressed in coat and tie, and at night he would vanish into it in still the same outfit or, if he’d had a performance, in white tie and tailcoat jacket. My mother too was always dressed in the house, with the exception that, to save her silk stockings, she would sometimes roll them down to her ankles if I was the only one around. This used to offend my childish sense of aesthetics, and I resolved never to wear my stockings around my ankles, an issue that was mooted by the time I came of age by the invention of panty hose.

In other words, there was in my family no transitional mode of dress, no way to signal the shift from activities in the public sphere to the comfort of being at home: you were either fully dressed, or you were in bed. Robes and pajamas were never worn outside the bedroom. The concept of “relaxed fit” did not exist for us, let alone any piece of clothing preceded by the adjective “sweat.” And nobody, with the exception of pre-pubertal boys, ever wore shorts.

You might conclude that we were a formal, uptight bunch, but there never was a more demonstratively affectionate family. Not only was I constantly being kissed and patted and pulled onto laps, but my mother and father both kissed their own and each other’s parents whenever they met and parted. (To this day it seems bizarre to me to  watch American fathers shake their sons’ hands as if they were business acquaintances or at risk of being “converted” to homosexuality.)

This quasi-Victorian habit of being fully dressed from morning ’til night had a counterpart in the use we made of furniture. Just as I never saw my parents in pajamas, I never saw them recline on a sofa—not on the big upholstered velvety one in the living room or on the spartan “modern” one in the dining room. The rest of the furniture consisted of straight-backed chairs with uncompromising wooden seats, and this may have had something to do with our upright postures. Another factor may have been the perennial presence of the maid who shared our apartment (n.b. having a live-in maid was not an indication of wealth. It simply meant that you were less poor than the maid).

Still, since we didn’t have a car, everyone in the family, no matter their age, trotted miles every day on the cobbled streets of Barcelona, and they must have been tired when they got home at the end of the day. Maid or no maid, why didn’t they take off their shoes and hats, girdles and jackets, slip into something comfy, and put their feet up on the sofa?

Eventually America—through the quality of its upholstery, the universal injunction to “take it easy,” or perhaps something in the air—worked its magic on me. I gave up the habits of my parents’ house, and gradually abandoned the vertical for the horizontal.  I am a great believer in hassocks and footstools, and spend far more time stretched out on my sofa than sitting up on it. I do sit at the table to eat, although I would much prefer to dine like the ancient Romans, reclining on a couch.

As for what I wear in the house, I am inordinately fond of negligees. I don’t mean lacy, frothy things, but negligees in the original sense of the word: neglect wear, the stuff you wear for yourself instead of others. Not that I don’t care about the looks of my neglect wear—I don’t want to depress myself if I glimpse myself as I pass in front of the mirror. But I prize the soft, forgiving embrace of the various pajamas and kaftans, djellabas and burnooses that crowd my closet. It must be a legacy of my Moorish ancestors, this fondness for loose, flowing apparel.

Or that is what I tell myself these darkening days as, ever earlier in the evening, I give myself permission to peel off the armor in which I greet the outside world and exchange it for the neglect wear that comforts and restores me. 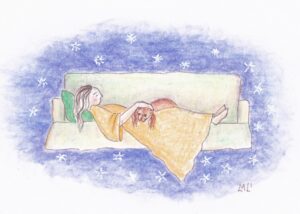