I don’t remember how we ended up with three guinea hens in our chicken coop. Someone must have given them to us, and being new to homesteading, I felt that I couldn’t turn down a gift of livestock even if, as in this case, the critter looked like something out of the Book of Revelation.

Guinea fowl are chicken-sized, oval-shaped birds with tiny heads crowned by a stiff triangular knob. Their feathers are long and fluffy, grayish-black and speckled with white dots. And they are loud. The loudest rooster crow is only mezzo forte compared to the ear-splitting song of the guineas. They’ll be pecking at the grass, looking for ticks–they are champion tick eaters—and suddenly, out of the blue, they will shriek at the top of their voice, “come back! come back!” loud enough to make dogs bark and toddlers cry.

The guineas settled well into my flock of ten rescued Leghorn hens. Leghorns are pure white birds with big red combs, nervous and flighty and not very smart. But they do lay like crazy, which is why industrial egg farms favor them. I had bought my past-their-prime Leghorns from a farmer who was intending to turn them into dog meat.

My Leghorns were still laying well, but they lacked the self-confidence of sturdier breeds like Buff Orpingtons or Barred Rocks. A mere breeze would startle them, and they would scatter cackling, feathers flying everywhere, their combs flopping madly over their eyes. They were so highly strung that I longed for a chicken version of Prozac to calm them. Between their panicked squawking and the shrieks of the guineas, my chicken yard was hardly the tranquil haven I had fantasized.

Things usually calmed down at sundown when the birds went into the coop, but in the fall things changed. At midnight on the night of the first frost, I was awakened by a frantic chorus of “come back! come back!!!” I opened the window and peered into the darkness. Worried that the noise would wake up my children, and possibly even the neighbors, I ran to the chicken yard and banged on the wall of the coop. The shrieking stopped.

Everything seemed normal the next day, but on the stroke of midnight, the guineas’ raucous cries again rent the air. This time I was more irritated than alarmed. There were college sophomores waiting for me to teach them the plus-que-parfait the next morning, and I needed my rest. I grabbed a stick on my way out and struck the coop as hard as I could. Silence ensued, and I made my weary way back to bed.

When it happened again the next night, I made a decision. In the morning I took the guineas to a nearby farmer and paid him to kill and clean them. I took them home, put them in the freezer, and forgot them.

That night I slept for nine hours straight.

But the next day, when I opened the coop, I found the walls and roosts and nests spattered with blood, and all ten of my Leghorns dead on the ground, each with a single chunk missing from her abdomen. Who could have done this? A fox? But foxes are thrifty hunters, killing only what they can carry to their den. This was wholesale murder, slaughter for the pleasure of it, wasteful and abominable.

“Must have been a weasel,” the farmer said. “No other critter kills for sport. Your guineas were probably keeping it away, and when they were gone he saw his chance.” It made sense. Not just the guineas, but I with my banging had unknowingly kept the weasel from the coop.

As I gazed at the desolate poultry yard, it struck me how closely the guinea hen calamity resembled a Greek tragedy: I had unwittingly offended the homestead gods, and in revenge they deceived me into slaying the honest defenders of the chickens, and now my flock was no more.

That Thanksgiving I remembered the  guineas in the freezer. Waste not, want not being my motto at the time, I decided to have them replace the usual turkey. Although I did my best with stuffing and gravy, they were almost inedible, dry and tough as a chunk of wood. My family pushed away their plates and ordered a pizza, but I, in an act of atonement towards the innocent birds that I had so unjustly put to death, continued chewing and swallowing until every last bit of guinea was gone. 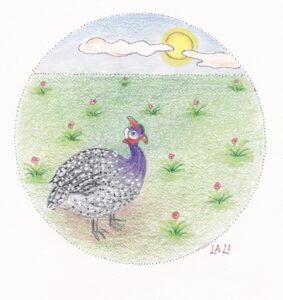