A Not So Charitable Rant

It begins in November. The local newspaper, the important bill, the handwritten note from a long-ago school friend are engulfed in a tide of mailings from charities to most of which I’ve never given a single penny. That does not discourage them, however, and year after year they crowd into my mailbox, enclosing small objects designated as  “gifts” in hopes of guilting me into giving.

The gifts are calendars featuring photographs of extraordinary but endangered bits of Nature such as blue whales, carnivorous orchids, and hummingbirds that weigh no more than a penny; notepads adorned with garlands of flowers (who, I wonder, designs these things?); and cheesy greeting cards. In the past, hoping to protect myself from the intended guilt, I would pick up these items with the tips of my fingers and drop them in the recycling bin as soon as they arrived. (You can read about my elaborate attempts to dispose of one such gift here.) Far be it from me to compromise my principles by using so much as a single sheet of notepaper from a charity to which I did not intend to contribute! But it didn’t work. No matter how quickly I disposed of those gifts, a gooey residue of guilt stuck to my fingers.

But as last December drew to a close my guilt was overshadowed by irritation. What had I done to deserve this persecution? What was I supposed to do with these poxy gifts? And what were these charities doing, destroying acres of woodlands to make into calendars and note papers and greeting cards and thereby endangering (albeit in the long-term) the welfare of the very populations they were trying to help? I regret to say that, by year’s end, the sight of yet another cute endangered animal and malnourished or even malformed child engendered the very opposite of compassion.

Guilt compounded by irritation makes for an explosive mixture, and I did finally explode, sort of. I picked up the calendar with the amazing nature photos and affixed it to my refrigerator door with a magnet, there to chart our doctor visits and car maintenance appointments through the coming year. I stacked the notepads next to my computer and started a to-do list on the topmost one. (The cheesy greeting cards did go in the recycling bin.) Then I went through each solicitation packet, extracted the “personal” letter detailing the biographies of the unfortunates in need of my immediate help, and wrote on it a note respectfully asking to be removed from the organization’s mailing list. Lastly, and this is the part that’s hard to admit, I placed the letter in the enclosed “no postage required” envelope and sent it off. (If the envelope did require postage, I affixed a stamp and felt a slight diminution of guilt.)

Then I went ahead and wrote my usual checks to the one or two charities to which I normally contribute.

I don’t know whether my little notes will have the desired effect. I do know that my explosion did not make me feel much better, although I try to console myself with the thought that if my strategy works I will be helping to save a tree, or at least a twig. But what about the endangered birds, starving children, desperate mothers, wounded soldiers, and the rest of suffering creaturedom? And if I decide to send money to feed the child, by what criterion can I ignore the woman, the soldier, or the bird?

Clearly, taking literally Jesus’ advice to sell all I have and give it to the poor would create more problems than it would solve. How much to give, and to whom, is an unanswerable question. The perennial low-grade guilt that thrums at the edge of my consciousness is the price I must pay for the privileges bestowed on me by the universe through no merits of my own. And when that same universe deals me the occasional blow, I am reminded that I too am a part of suffering creaturedom, as fragile and vulnerable as the bird et al. And that awareness, far more than unsolicited gifts and pathetic entreaties, deepens my compassion for my fellow beings, and keeps self-pity at bay. 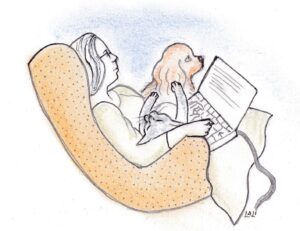