Wildness in the Night

10 p.m. I am in bed, eyes shut, light off, book closed. Manifesting suddenly out of the dark, the cat Telemann leaps on the bed and burrows into the crook of my elbow. He carefully places both his white-tipped hands on my upper arm, makes a couple of subtle kneading motions, snuggles into the duvet and, with his nose almost touching mine, settles in for the night. If I move my head slightly, or take a deeper breath, one of his stiff white whiskers brushes my face, which makes me jump. Sometimes he purrs, sometimes he doesn’t. In either case, breathing each other’s breath, we both fall asleep. And like the furry teddy bear who once shared my childhood bed, my cat remains still, warm, and comforting until morning.

The other night, half asleep with Telemann in my arms, I was thinking how he is the only cat I’ve known with such human-like cuddling propensities. I was patting myself on the back for my role in establishing this extraordinary bond when I realized that Telemann was no longer in my embrace. His paws were not on my arm; his nose was not breathing into mine; his whiskers were not brushing my cheek.

I opened my left eye. The snow-covered yard glowed in the moonlight, and there on the windowsill sat Telemann, staring out into the void, tail twitching, ears cocked forward in hunting mode. Hearing some creature outside, he had abandoned all pretense of pseudo-human cuddling and reverted to his true self: a beast of prey. A beast whose strict indoor life always keeps a pane of glass between his jaws and the neck of his victim, but nevertheless a hunter, a wild thing looking for other wild things—squirrels, chipmunks, mice, and who knows what else—to stalk, kill, and eat.

And for some reason the sight of Telemann outlined against the snow, “hunting” and being his lion-like self, filled me with joy. “We need the tonic of wildness […]” Thoreau said. “At the same time that we are earnest to explore and learn all things, we require that all things be mysterious and unexplorable.” He could never have imagined how wildness-deprived we’ve become—not only deprived of woods and mountains and snakes and catamounts but, thanks to online everything, deprived even of the wildness of other humans.

As I lay drowsing in the dark, gazing at the silhouette of my mercifully unknowable cat, I did feel, before sinking back into sleep, that I had been given a tonic, an infusion of that alien reality of which we are, though we mostly choose to ignore it, also a part. 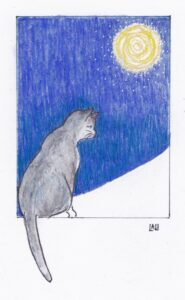 (My thanks to all who expressed concern about Bisou’s health issues, which I mentioned in my last post. The tests showed the best possible results for a dog her age: heart not enlarged, murmur minor for the moment, no need for heart meds. A couple of other little problems will be addressed with ginseng and a tweak in her diet, and she should regain some of her former j de v. I will keep you informed.

Be sure to enjoy the extra twelve seconds of daylight tomorrow. I will not be posting the week after Christmas. Happy holidays to all, and thank you for reading this blog.)