My new blog platform comes with search engine optimization (SEO), a gizmo that helps to ensure that if someone in darkest Africa googles, say, “memories of a Catalan childhood,” My Green Vermont will appear near the top of the list.

After I finish writing a post, my SEO evaluates it for the qualities that will endear it to search engines. I have never seen a search engine, but I have a clear vision of it, a large spider-shaped robot trolling the Mars-like landscapes of the internet looking for stuff. Like Sister Mary Ruth, my high school English teacher, the SEO is not shy about pointing out shortcomings, but when it likes what I’ve come up with, it is unstinting in its praise.

Unlike Sister Mary Ruth, however, my SEO makes some pretty odd requests. It wants me to come up with a brief but attention-grabbing title, a “key phrase,” and a “meta description,” all of them distilling the essence of my piece and using the same words. Search engines, being of limited intelligence, require lots and lots of repetition.

In every piece, the SEO advises me to include at least one link to another post in my blog, and when I do so it praises me: “good job!” It loves pictures, and if I add a drawing it gushes, “that’s great!” It likes the brevity of my paragraphs and the modest length of my posts (“great job!”), but it urges me to use subheadings to keep readers from getting lost in the labyrinths of my prose. It rejoices (well done!) in my use of “transition words,” what Sister Mary Ruth used to call “conjunctions.” And it delights in the variety of my sentences and my moderate use of the passive voice (like Sister Mary Ruth, it hates the passive voice).

There is one area, however, in which I consistently disappoint my SEO: sentence length. It seems that too many of my sentences have over twenty words, which causes my Readability score to plunge to slightly over 50%, which is considered (passive voice alert!) “fairly difficult.” This earns me a red frown face in the Readability column. If I want the red frown face to turn into a yellow smiley, I need to shorten my sentences.

The trouble is, I like long sentences. I like reading long sentences, if they are written by good writers, like Proust, and Henry James. I enjoy disentangling their knots of relative clauses, some of which nest inside each other like Russian dolls. Here, for example, is a gem by Henry James, which I found at random near the beginning of The Ambassadors:

There were people on the ship with whom he had easily consorted–so far as ease could up to now be imputed to him–and who for the most part plunged straight into the current that set from the landing-stage to London; there were others who had invited him to a tryst at the inn and had even invoked his aid for a ‘look round’ at the beauties of Liverpool; but he had stolen away from everyone alike, had kept no appointment and renewed no acquaintance, had been indifferently aware of the number of persons who esteemed themselves fortunate in being, unlike himself, ‘met,’ and had even independently, unsociably, alone, without encounter or relapse and by mere quiet evasion, given his afternoon and evening to the immediate and sensible.

Whew! Coming to the end of a sentence like that one is like coming up for air after swimming underwater for the length of the pool, or coming out of the forest into a clearing, or hearing the resolution of a Bach fugue. (Thanks to Henry James the readability score for this post is now in the basement.)

If Proust and Henry James had written blogs, nobody would have ever read them. Colette, who used to sit for hours chewing her pen and making sure that the same word didn’t appear twice in one page, would have failed miserably at titles and key phrases and meta descriptions. On the other hand, Hemingway’s staccato syntax would have been an SEO’s dream.

As for me, heaven knows that I want readers in every corner of the planet to find and enjoy my work, but I bridle at some of the SEO’s demands. I will not, for example, repeat my title word for word in the first paragraph. I will, when it suits me, use the passive voice. And don’t even get me started on subheadings. Fortunately, my SEO is not Sister Mary Ruth, and my decisions regarding sentence length, meta descriptions, and external links are strictly between me and my Muse. 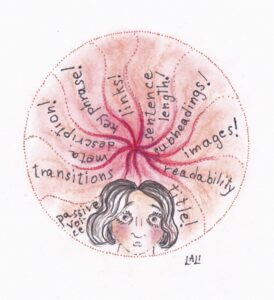