He first saw her on stage as she read stanzas of a poem by Federico García Lorca about the death of a bullfighter. Interspersed with the poetry were sections of orchestral music composed by my father, who also conducted. For Birmingham, Alabama in the early sixties, this was pretty exotic stuff. Pink-faced, balding, and a banker by profession, Mr. B had been to Spain, where he fell in love with the sun, the food, and the wine. When he saw my mother under the lights, dressed in black and declaiming Lorca’s sonorous lament, she went to his head like a bottle of full-bodied Rioja.

A few days after the performance, Mr. B appeared at our house with a gift for my father: a flat, oblong box bearing the name of a famous designer and containing a blue silk tie—a token, he said, of his admiration for my father’s music. My parents thanked him profusely. After he left they looked at each other wonderingly.

“How thoughtful,” my father said, “of Mr. B to make me this gift.” “Yes,” my mother responded, “these North Americans are always so generous.” My parents often exclaimed about the kindness of Americans, so I assumed that Mr. B was just another local showering them with expressions of friendship, and thought nothing more of him.

But Mr. B was thinking of us. The following week, the postman left an issue of The New Yorker in our mailbox, with a card announcing that a subscription had been purchased by Mr. B on behalf of Mr. and Mrs. Luis Benejam, with deep regard and best wishes. In the two years since our arrival in the U.S., my parents had been busy learning English, figuring out life and work in an alien culture, and having a second baby after a sixteen-year bout of sterility. They had not had time to delve too deeply into American intellectual life. The New Yorker was a revelation to the three of us. The articles! The cartoons! That Mr. B was too much, my parents said, shaking their heads. How would they ever repay him?

Another week passed, and another package arrived from Mr. B, this one addressed to my mother. It was a beige alpaca shawl, light as a feather and warm as an embrace, and was met by my parents with the usual exclamations of wonderment and gratitude. If there was irony in their words, I didn’t catch it. Did my parents ever discuss, in the privacy of their bedroom, what Mrs. B, a prim and proper lady with tightly permed hair, might feel about those gifts?

Then one afternoon after school, on my way to the kitchen, I saw Mr. B in the front room with my mother. He was about to leave, and at the last moment he turned, picked up my mother’s hand, and brought it to his lips. I caught a glimpse of an odd little smile–half pleased and half repressive– on my mother’s face, and stomped past with a scowl worthy of an elderly chaperone.

I did not suspect that there was anything more going on than that kiss. My parents were far too Catholic and fond of each other—plus, my father’s full head of jet-black hair put Mr. B’s baldness to shame. My disapproval sprang from the realization that my mother was flattered by the attentions of her admirer.

But I also felt obscurely that it was now MY turn to be the center of male attention, or soon would be, and that my fortyish mother should retire from the dance floor and sit on the sidelines where she belonged. You wouldn’t have known it seeing me then, pimply and plump and prone to alternating fits of shyness and exuberance. But deep in my fifteen-year-old heart a fierce if naïve fighter was preparing for the struggle that would soon engulf my mother and me—the battle for the role of alpha female.

My mother wore the alpaca shawl until she died. And every week, when my new issue of The New Yorker arrives, I think about Mr. B. 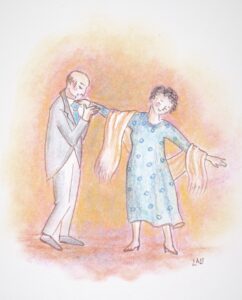