I am not the kind of woman who says no to a man who wants to give her a puppy, so when for my 26th birthday my husband told me his gift idea, even though I had a babe in arms at the time and life felt full to overflowing, I said it was a lovely thought. We grabbed the baby and the classifieds and went on our search, with no preconceptions as to breed, size, gender, or temperament. We were both graduate students, but that didn’t keep us from being idiots in many respects. Barely an hour later we were back home with an infant German Shepherd, whom we named Tinchen.

Tinchen lived in the fenced-in backyard, in a huge doghouse that my husband, assuming that bigger was better, built for her. We didn’t know at the time that too-large dog houses are hard for the dog to warm with her body heat. I remember coming back from campus or the grocery store, loaded with books, baby, and/or groceries, and being met by Tinchen at the gate, exclaiming, with every inch of her body, “I’m SO glad you’re back! I love you SO much!” And I’m sorry to say that the main thing in my mind at the moment was to get the baby and the rest of the load inside the house quickly and without dropping anything.

In due course, Tinchen came into heat. We didn’t give it much thought, figuring that the four-foot-tall fence would keep male dogs away (like I said, we were idiots). And for a while this worked. All manner of smallish free-roaming neighborhood mongrels congregated and fought duels at our fence, some even leaving their collars as ex-votos of their passion, but Tinchen remained unmolested. Imagine my surprise when one morning as I fed breakfast to the babies (my second daughter had been born by then) I looked out the window and saw Tinchen in flagrantis with Duke, an enormous, lordly male of her same breed, who patrolled our streets and liked to accompany women pushing strollers on their rounds.

Two months later, on the coldest night of the year, Tinchen had her puppies–eleven of them–in the doghouse. By the time we realized what was happening (we were idiots!), all but three had died. But we had enough sense to pick up Tinchen and the survivors and bring them into the house, where we improvised a bed for them in the laundry room. My recent experiences of motherhood had taught me the importance of an early feeding of colostrum, so I kept shoving the three puppies at Tinchen’s teats until they latched.

Why, with all this interference, Tinchen didn’t bite off my hand, I don’t know. I guess she realized I was a well-meaning idiot. One day, while she and the puppies were still living in the house, my younger daughter, who had just mastered a speedy crawl, zoomed across the room and, before I could catch her, pulled herself to standing by grabbing hold of Tinchen’s teats. Time stood still as I flung myself through the air to save my daughter. But when I got there the baby was balancing precariously on her feet, still holding on to Tinchen, who wagged her tail, turned her head, and gave my daughter a lick on the cheek.

The puppies prospered, and eventually they and Tinchen returned to the backyard. But something had changed in me: now as I went in and out of the house and saw the longing in Tinchen’s golden eyes, I felt guilty. There were precious few books around about dog psychology at the time, and if there existed people who believed that dogs had emotional lives of their own, I had never met them. But Tinchen’s eyes awakened echoes of my childhood distress at my grandfather’s chained-up Hunding’s loneliness, and every time I closed the door in her face I felt like I was shutting out a friend.

It was not difficult to find good homes for the three handsome, large-pawed, broad-muzzled puppies once they were weaned. Soon after that, we finished school and prepared to move to Maryland, to a tiny faculty apartment on the campus of the college where I would be teaching. There wouldn’t be enough room for Tinchen, and she went to live with a couple who I hope treated her more intelligently than I did.

We have had eleven dogs since Tinchen. Heaven knows, I have made my share of mistakes with every one of them, but never again did I shut the house door in a dog’s face. From then on, all our dogs lived in the house. The books by the Monks of New Skete, though maligned by some today, opened the doors to a whole new way for me to relate with my dogs, of whom I usually had two at a time (if dogs kept humans as pets, I reasoned, wouldn’t I like to have someone around who could speak my language?). I took them to puppy classes and obedience classes and agility. I tried, and mostly failed, to teach them to walk nicely on leash. I worried about their emotional states–were they lonely, bored, depressed? Over the years the dog bed made its way from the basement to the kitchen, to the upstairs hallway and, when I read that having your dog sleep in the bedroom encourages bonding, to my bedside.

And that is where Bisou, my twelfth and final dog, spends the night, or at least the first part of it. Between three and four a.m. she jumps up on my bed and lies next to me. Between then and sunrise, she maneuvers closer and closer, making herself at home, letting me know that, given what is going on in the scary world outside, the rightful place for a dog is right up against, if not on top of, her human. 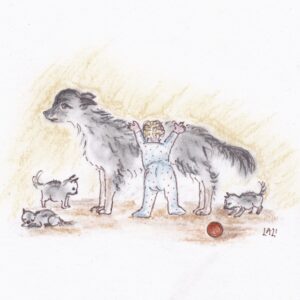