Many years ago, before Santa and his avatars invaded southern Europe, a Catalan Christmas was mostly about midnight Mass, and manger scenes with shepherds, angels, and el Nen Jesús, so tiny and unnecessarily uncomfortable on the prickly straw. I was allowed to play with the tiny shepherds and their sheep (never with the Holy Family) while the grownups feasted on capons, turrons, and champagne. Those Christmases had nothing to do with gifts, which didn’t arrive until January 6, when the Magi came with their loaded camels. But the German nuns who ran my school in Barcelona had a different vision of Christmastime. For them, the season had to do with snow (Schnee!), which we hardly ever saw in Barcelona, fir trees (Tannenbäume!) decorated with burning candles, and practicing the art of waiting, with the help of the Advent calendar.

At the time, Advent calendars were unknown outside Germany, and the nuns imported one for each classroom. The calendar’s cardboard front featured a German village, with lots of Schnee coming down. The houses had steeply peaked roofs and a total of twenty-four tiny windows. At the end of each day the teacher would select a student to open one of the windows. We waited for this moment, hoping to be chosen, and wondering what the window would disclose: a sheep, an angel, or, even better, a squirrel eating a nut (there were no squirrels in Barcelona). After the day’s window was opened, we would sing a Christmas song in German (Ihr Kinderlein, kommet; Heilige Nacht). We didn’t understand the words, but that only added to their charm.

On the last day before the holidays, the teacher herself would slowly and majestically open the big doors at the center of the calendar, revealing the Holy Family surrounded by angels and animals. More carols, and then I would skip home through the sunny streets of Barcelona, singing Schnee, Schnee, Schnee, alles is voll Schnee!

How to explain the magic of those calendars? It was a magic made of mystery: what amazing tiny item, visible to the eye but never to be touched, would be revealed–a star, a sled, a teddy bear? What were the interiors of the houses really like, and what other German wonders lay hidden behind those cardboard walls?

It was a magic made of waiting. Just as Advent’s long four weeks added luster to Christmas, the magic of the calendar was more potent because we had to wait for it until the end of the day’s lessons (remember how long one school day could seem?) and because of wondering who would be chosen to open the window.

And it was a magic made of relative scarcity. My life was rich in affection, good food, ancient traditions, music, and stories, but the contents of my toy chest would seem pathetic to a child today. I was taken to the movies–Lassie, Walt Disney’s Snow White–once or twice a year, and la tele was still decades in coming to Spain. In that context, it’s no wonder that the ceremonial opening of a little carboard window felt miraculous, and the object it revealed was suffused with a warm glow–the glow of candles on a dark, snowy night, the glow of Christmas itself. 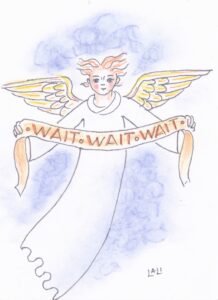 PrevPreviousThe Trees And Me
NextThe Glitch Is Gone!Next