For most of my life I paid little attention to Queen Elizabeth. My information about the British royal family came from the same sources as my information about Hollywood stars—magazines in doctors’ waiting rooms detailing the extravagance of their lives and behavior. But in 1992, the annus horribilis marked by Charles and Diana’s separation, Fergie’s affair with her financial advisor, and Princess Anne’s divorce, I thought about how hard it must be for the mother and mother-in-law of these misbehaving grown-up kids to cope. She was sixty-six at the time, which seemed old to me, and I wondered what all the brouhaha must be doing to her. The poor woman should be retired, I thought, talking long walks with her dogs, reading novels, and knitting booties for her grandchildren—not representing a nation and dealing with the media and her descendants’ scandals.

But it didn’t stop there. Charles and Diana divorced in 1996, as did Andrew and Fergie, and Diana died the following year. How did the by then seventy-one-year-old queen cope with the worldwide frenzy of mourning for one who, to Elizabeth’s mind, had done perhaps irreparable damage to the monarchy?

When Elizabeth turned ninety-three, things got even worse. Prince Andrew (known for years as Randy Andy) withdrew from all public royal duties after being accused of having had sex with an underage girl under the auspices of the abominable Jeffrey Epstein and Ghislaine Maxwell.

In 2020 her grandson Harry and his wife Meghan resigned as “major” royals, moved to California, and gave an interview that focused mostly on the less-than-optimal state of the family’s wokeness. “How sharper than a serpent’s tooth is an ungrateful [grand] child” must have run many times through Elizabeth’s mind. She was ninety-four. Then, in 2022, just a few months ago, she lost her husband.

All through the years of her travails I found it amazing that she continued to function, to show up, to do her job. True, she had lots of help. But I didn’t envy her the butlers or the ladies in waiting or the palaces so large that sometimes she would get lost in them and have to be rescued. I envied her her horses and her dogs, but I didn’t envy her those matching hat-and-coat outfits, or her hairdresser, and certainly not her children and grandchildren.

Most of all, I didn’t envy her her job. I, who in my years as faculty member used to sneak a book under my regalia to avoid having to listen to graduation speeches, and who am wont to make discreet exits from meetings, rituals, and ceremonies that drag on too long, would not have lasted five minutes in the queen’s shoes (which were always scrupulously matched to her coat and hat).

So in times of slings and arrows, when I feel as if the universe is using me for target practice, I think of Elizabeth—not as queen, not as symbol and love object of Britain and its dominions, but as a little old lady with a terrible job and fairly lamentable descendants, who nevertheless every morning, after the latest embarrassing revelation or catastrophe, would rise from her canopied bed, remove the curlers from her hair, get dressed, pat her corgis, loop her purse strap over her forearm and, standing as straight as she could manage, get on with the day’s batch of deadly duties.

She was old, is the thing, and we aging humans need older models than us to light the road ahead, just as the young do. So when sad, scary, or simply annoying stuff comes my way, I peer inside myself for a hint of the fortitude of the late queen, whose claim to glory, in my eyes, derives not from monarchical folderol, but from having been a person of courage. As the years go by, I hope to come to resemble, in however small a way and minus the perms and the matching outfits, the woman who, buffeted by every imaginable wind, held herself together for ninety-six long years. 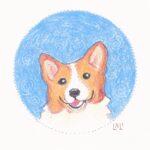